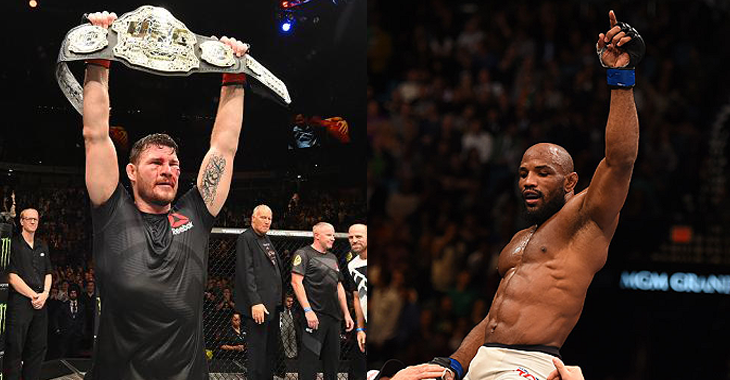 UFC President Dana White shocked quite a few people announcing that the UFC middleweight title fight between champion Michael Bisping and Georges St-Pierre is no longer happening. White added that Yoel Romero is now getting the shot against Bisping and the opening odds are not favoring the current champion.

According to the Sportsbook odds via Best Fight Odds, Romero is heavily favored in the UFC middleweight title fight at -350 while Bisping is at +270. For those unfamiliar with betting odds, you would have to wager $350 on Romero to win $100 or $100 on Bisping to win $270.

Michael Bisping is currently riding a five-fight winning streak and is coming off a UFC middleweight title defense win over Dan Henderson, which took place at UFC 204 in October. Bisping won a unanimous decision over Henderson. Prior to getting his revenge on Hendo, Bisping beat Luke Rockhold by KO in the first round to win the UFC middleweight belt at UFC 199 back in June of last year. Bisping also won a controversial fight over former UFC middleweight champion Anderson Silva at UFC Fight Night 84, which set him up for the UFC 199 middleweight title fight against Rockhold as a late replacement for an injured Chris Weidman.

Yoel Romero is riding an eight-fight winning streak and is undefeated in the UFC. Romero is coming off a third round KO over former UFC middleweight champion Chris Weidman, which took place at UFC 205 in November. Prior to the win over Weidman, Romero won a close split decision over Ronaldo “Jacare” Souza at UFC 194.

What are your thoughts on the current odds for Michael Bisping vs. Yoel Romero? Let us know in the comment section who you would put your money on!