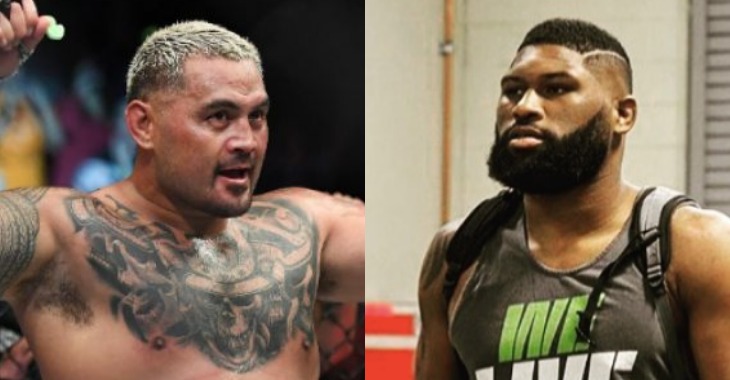 Yesterday morning, UFC heavyweight legend Mark Hunt took to social media with a threatening message directed at his next opponent. He did not, however, specify who that next opponent was.

“You have called me out, and now I’m going to give it to you right in that big mouth of yours,” Hunt said in this post, which has since been deleted “I’m going to wrap this gift up nice and tight for you boii so you never compete again at this level. The only good thing I can say about you is you are not a spineless coward mutt like ‘Werbum’. There isn’t anything worse for me than someone who is scared to fight like ‘Werbum.’”

Now, we know who Hunt’s next opponent is. He’ll take on surging contender Curtis Blaydes – who, contrary to the post above, never actually called him out – when the UFC touches down in Perth, Australia with UFC 221 this February 11.

This heavyweight booking was first reported by The Daily Telegraph. A member of Blaydes’ team told BJPenn.com that the rising heavyweight is “excited and humbled to fight a legend like Mark.”

Hunt will enter this fight having not fought since the spring, when he battered an exhausted Derrick Lewis to a fourth-round TKO. In his next most recent fight, he was knocked out by an Alistair Overeem knee. This loss, finally, was preceded by an ugly loss to Brock Lesnar, which was overturned when Lesnar tested positive for banned substances. The MMA legend is 13-11-1 overall – a mark that is far from indicative of his skill or accomplishments.

Blaydes meanwhile, will step into the cage in Perth on a fantastic, four fight-streak composed of wins over Cody East, Adam Milstead, Daniel Omielańczuk and Oleksiy Oliynyk. Of these men, only Omielańczuk survived to a decision with the hulking American wrestler. Blaydes has only lost once as a mixed martial artist, coming up short in his short-notice UFC debut opposite current number-one contender Francis Ngannou. Regarded as one of the brightest young contenders in the heavyweight division, the 26-year-old is 9-1 overall.

Who do you think comes out on top in this Mark Hunt vs. Curtis Blaydes bout at UFC 221?