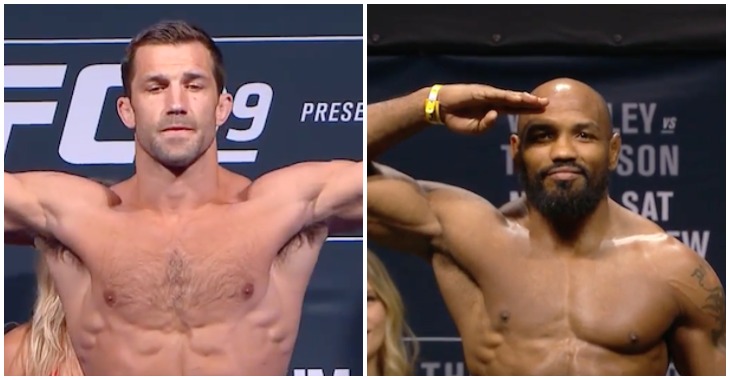 The former Olympic wrestler Romero is currently undefeated in the UFC, having gone 8-0 in his first eight bouts with the promotion. Over the course of this impressive run, he’s defeated game opposition such as Derek Brunson, Tim Kennedy, Lyoto Machida, Ronaldo “Jacare” Souza, and most recently, Chris Weidman. At a glance, this would seem like more than enough to earn him a shot at gold. Unfortunately, St-Pierre’s title shot deprives him of this opportunity for the time being.

Since the announcement of St-Pierre’s middleweight title shot, Romero has flip-flopped on his plan of action. First, he suggested he’d be willing to fight Anderson Silva for an interim title in the meantime. Then, he said he’d prefer to wait for a fight with the Bisping vs. St-Pierre winner.

As it turns out, however, he may have a third option. During a recent appearance on UFC Tonight, former UFC middleweight champion Luke Rockhold suggested that he’d be able to fight Romero in the meantime – but only if there’s a belt on the line.

“If they want to put a real belt on the line, I’d gladly go fight Yoel for it,” Rockhold said (via Fox Sports). “But I want security. If I’m going to go fight a top guy, I want to know that my next fight is the unified title and get that going. I’m not here to dance around. I’m here to fight for titles and fight for championship money.”

Whether this possibility would interest Romero is difficult to say. Would you be interested in a Yoel Romero vs. Luke Rockhold interim title fight? Sound off, PENN Nation!