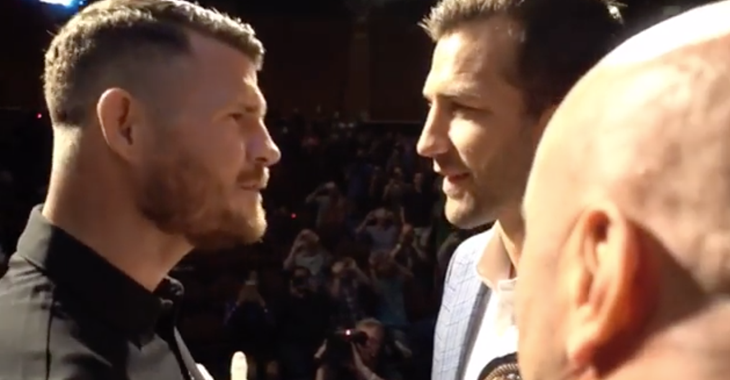 Following the bout, the pair were involved in two post-fight exchanges. The first took place in the Octagon, when Bisping attempted to shake Rockhold’s hand for a second time. The second came at the post-fight press conference, where Rockhold stated that he would “kill” Bisping.

In the wake of the bout, Rockhold joined The MMA Hour to reflect on the bout, and Bisping as an opponent:

“Anyone can get caught in this game if you hit them perfectly. He’s a tough guy, not going to lie. He won fair and square, but the odds of that happening again are fairly low. He caught me on the tip of the chin on my way out and followed it up. Congrats to him, he won. I think the guy is a true piece of s–t and I think he is classless. I’d love the opportunity to get that back and right that wrong and fix this for everybody because I don’t think he deserves it. I don’t think he knew he was going to do it, you can tell by his reaction. It’s not going to last long. I want to settle the score. I was winning both fights handily. He had his moment, but that will be it.”

While no plans have been revealed for Bisping’s first title defense, the champ has made clear that he would like to avenge his loss to Dan Henderson.