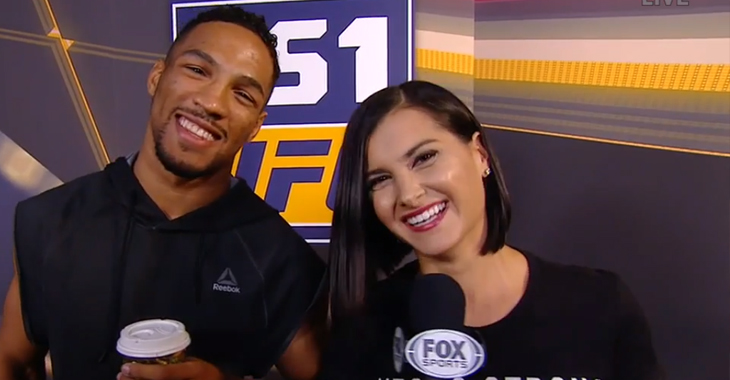 We’re still a wreck from yesterday but Kevin Lee looks on top of the world. A couple of days ago, it was reported that he had to lose 19lbs in 20 hours. It was a long and stressful cut, but he pulled it off yesterday. Last night after the big ceremonial weigh-ins, Kevin Lee joined Megan Olivi to talk about the whole situation. Thankfully, he was sipping on a drink during the interview.

“It’s always a tough weight cut. This is my first time in a title fight, so we just mistimed it a little bit. But, I feel like a million bucks now. I got some hydration in me. I’m going to be the bigger, stronger man out there. I always am. And, like I said yesterday, I ain’t no b-tch. It’s always going to be a tough weight cut, but I’m going to get it done. Tony [Ferguson] already know. It’s no more time for talking. Talking is over. I let him have the media yesterday. I let him get out his little scenarios, his little words, whatever he want to say. The time for talking is over.”

“Today, we showing up and that’s all it’s going to be. Tomorrow, he better be ready to fight, I tell you that. I ain’t been doing none of the talking through and I’m not going to start now. So, he better be ready to fight. All the hard work is already done. That weight cut was probably the toughest part of the whole thing. Now, it’s just about me going out there and doing my thing, having fun, nobody’s going to stop me from winning this championship belt. Even when I was overweight and I didn’t want to do it and I didn’t want to go back, I got a title to win. So, that’s what I’m about to do.” — Tony Ferguson to Megan Olivi.

All said and done, you have to hand it to Kevin Lee. Despite the brutal cut and the stress of the big moment, he says he feels like a million bucks and it shows. We don’t have long to find out if the cut affects his performance in the Octagon. Tony Ferguson is the kind of guy you can’t give an inch against. These two will finally fight in the main event tonight at UFC 216. The interim lightweight title is on the line, but more importantly, a chance that Conor McGregor will pick the winner for without a doubt the biggest money fight of any of their careers.