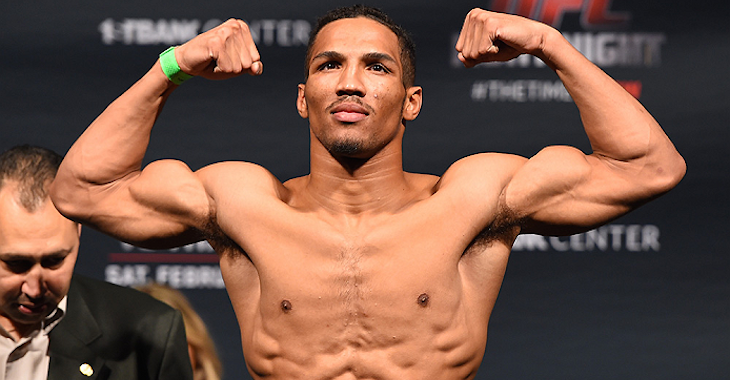 Yesterday was a wild roller coaster of suspense. It was one of the most stressful weigh-ins of UFC history, as yet another fight with Tony Ferguson looked like it was about to be called off. Kevin Lee pushed through a brutal weight cut, made championship weight in his second attempt, keeping the main event still intact. The problem is, situations like this happen all the time. Kevin Lee made it through healthy, but it doesn’t always end up that way. His coach spoke out yesterday after the weigh-in and said that fighters will always do this until the system changes.

“No [I’m not concerned]. We’ve done this every camp [with Kevin Lee]. He’s a huge dude. And I would venture to say Tony [Ferguson]’s probably not a lot smaller at this point. You’re talking about the big, big guys in this division. They all have tough weight cuts. Until we make a change in the rules, that’s going to be what it is. Until they add some weight classes or change how the weight cuts go, if you want to be a dominant force, you’re going to be pushing that envelope. And I don’t expect it to be a problem this week.”

I’m willing to die bout this shit. I got a title to win tomorrow. Nobody gonna stop me. #25toLife

“I’ve worked with a lot of athletes over the years, and I’ve had guys coming up on 18 years in the UFC, and [Kevin Lee]’s one of the top athletes I ever worked with. His mental strength is very good. Like he even said: Between rounds, he’s a very smart fighter. He’s able to listen, make adjustments, and go out there and put the corrections in on the fly. So, I feel like we’ve earned this shot. This isn’t something that we’re in over our heads with. We’re very well prepared. We’ve been working for this since we started working together four years ago, and we expect to go out and win a belt.” — Coach Robert Follis speaking to MMA Junkie.

His coach might not have been worried, but everyone else sure were. There have been so many fights canceled or postponed due to problems like this, but the most important thing is health. More weight classes maybe isn’t even the answer, given that fighters would always be looking for the advantage. Even if there’s a solution, there’s definitely no easy one. It’s just something we’ve all — the fans, fighters and media — kind of accepted as a part of the sport. Despite all this, Kevin Lee goes on record saying his bad cut won’t affect his performance tonight. We’ll see how he looks in just a few hours when he fights Tony Ferguson for the interim lightweight title at UFC 216.