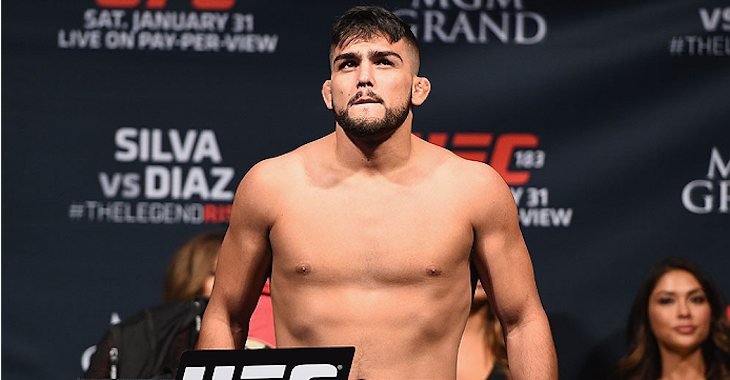 The middleweight division was just on the verge of reaching a relatively normal state of affairs and then an injury sent it right back into chaos. Georges St-Pierre bowed out of the division and left his new title behind. Whittaker was promoted to the undisputed champion but had to pull out of his first defense. Yoel Romero was immediately booked into Whittaker’s fight with Luke Rockhold and it was changed into an interim title bout. If you’re confused, don’t worry, Kelvin Gastelum is too. He thought he was a shoe-in for the shot after his performance at UFC Shanghai, but the UFC had other plans.

“It does bother me a little bit that I haven’t even been considered for a shot, but it is what it is, I know this is a process, and I’m just dealing with the process. What I do think set me back was Robert Whittaker getting hurt and them making that match-up for the interim [middleweight] belt. That sets every middleweight back, because the winner is going to have to fight Whittaker. It’s just going to have to be a process for anyone to get a title shot.” — Kelvin Gastelum speaking to MMA Junkie.

Y’all forgetting Luke is also on a 1 Fight win streak! Got KOd by the guy I just beat! Came back after 2 yrs to beat a guy who didn’t compete in Ufc a year ago https://t.co/miuaO0mC2O

“I knew Luke Rockhold and I were both in the front-running for this fight. I was then told Robert Whittaker wanted the tougher fight and he picked Rockhold. In my opinion that is the easier fight because I feel I’m the toughest fight for anyone in this division. I think Whittaker took the easier fight by going with Luke. He’s absolutely worried about me and for good reason. He and I have trained together in the past and know what the other is all about. We know what the other brings to the table.” — Kelvin Gastelum speaking to FloCombat back in December.

It’s been a long 18 months of fighting, training and fighting again and again. I guess I should have taken those 18 months off ,instead to get a title fight.

After all, Kelvin Gastelum just knocked out the former champion Michael Bisping directly after he lost his title to Georges St-Pierre. Gastelum brings up the fact that Rockhold’s last win was against UFC newcomer David Branch. While he’s a former multi-division WSOF champion, it was his first fight in the UFC’s Octagon. While the UFC has already made their decision and booked the fight, Gastelum should be in line for a high profile bout after his win over Bisping. Although it still won’t be a title shot, that goes to whoever wins in UFC Perth’s main event to unify the interim belt with Whittaker’s real title.