McGregor and Poirier collided for a second time in the headliner of tonight’s pay-per-view event from Abu Dhabi. The pair had first met at UFC 178 in September of 2014, with ‘Notorious’ emerging victorious by way of first round TKO.

Justin Gaethje, who suffered a submission loss to reigning lightweight champ Khabib Nurmagomedov in his most recent effort at UFC 254, had previously weighed in on ‘McGregor vs. Poirier 2’ matchup in a recent interview with Helen Yee. 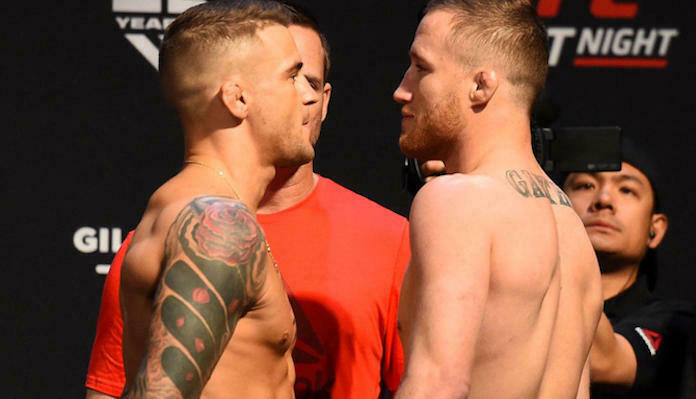 Justin Gaethje (22-3 MMA) and Dustin Poirier previously squared off in April of 2018, with ‘The Diamond’ emerging victorious by way of fourth round TKO. So, ‘The Highlight’ was not underestimating Poirier’s skillset.

Still, Gaethje ultimately rolled with the former two-division champ in Conor McGregor ahead of tonight’s rematch citing the Irishman’s mindset as a key factor.

Despite promising a “masterpiece” this evening, Conor McGregor was unable to deliver and wound up losing his rematch to Dustin Poirier by way of second round TKO.

Check out how Justin Gaethje reacted the Poirier’s sensation upset victory below:

“2021 going to be a hell of a ride in this division. Great night of fights. Happy for Dustin Poirier.”

Justin Gaethje has been linked to a bout with streaking division contender Charles Oliveira next. However, ‘Do Bronx’ and his team have stated that they have no interest in fighting ‘The Highlight’ at this time.