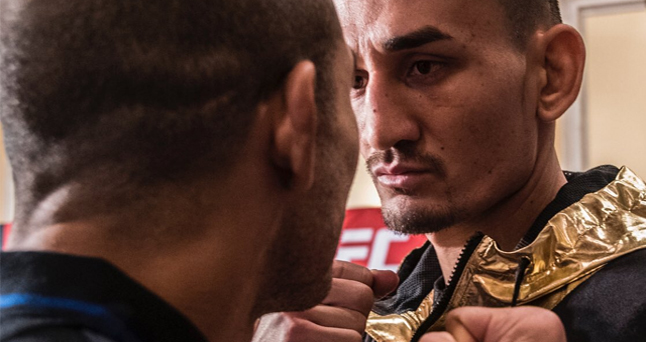 One by one he took them out. Every single one of them. No matter who the UFC threw at Max Holloway, he dispatched them. He stacked up a 10-fight win streak, seven of them being either by submission or TKO/KO. Topping it all off by finishing the former featherweight king Jose Aldo. After ushering in the ‘Blessed Era’, Holloway struts into fight week ahead of his rematch with Aldo glistening in a jacket that looks like it was made from his UFC title. The symbolism surely isn’t lost on the Hawaiian fighter, who knows full well what this means for his legacy.

“I’ve got bigger things. Bigger fish to fry. It is what it is. I’m just enjoying the moment, enjoying the ride. I get to prove. I get to set a legacy. You want to cement your legacy and I get to do it like Drake said, back to back and December 2nd is where it starts. I’m bringing some Hawaii love. Right here, this is Detroit. My shoes — Big Sean made these shoes — they’re called Hawaii because he always visited Hawaii. So, that’s my little love to Detroit and I’m bringing lava Saturday night.”

.@BlessedMMA and @josealdojunior face off at #UFC218 media day. The UFC featherweight title rematch is upon us pic.twitter.com/eNbBsYLz6F

“[Jose Aldo]’s looking at the fight thinking how he can beat me, and I watch the fight not only for him, but to watch myself, to see what he thinks he can do. That’s why every fight, you see a new me, the best me. From fight to fight, I always try to see what guys think they can beat me in, and then when I go in there, and they figure out they can’t do what they thought they was going to be able to do, they’re sinking quick in quicksand. I always do my homework, and it shows out there. This ain’t no different. I say 0-0 all the time and I keep true to it. Steady pressure always wins and I can’t wait to go out there show them, man. This is a legacy fight. This fight is huge for me and it’s for my legacy. He’ fighting for his legacy and I get to cement mine Saturday night.” — Max Holloway speaking to MMA Junkie.

Wrapped in gold and lines from Drake swimming in his head, Max Holloway has been using the phrase ‘it is what it is’ as a mantra since Frankie Edgar had to pull out of their initial match-up at UFC 218. He even made a t-shirt. It’s what he said when was potentially going to have to fight a lightweight on the card. It’s what he said when he found out Jose Aldo would challenge him again instead. But from his preparation to his outfit, it seems Holloway is everything but Devil-may-care. The Adidas ‘Hawaii’ Big Sean collaboration even has the quote, ‘Dreams stopped being dreams when they turned into goals’ emblazoned inside the insole.