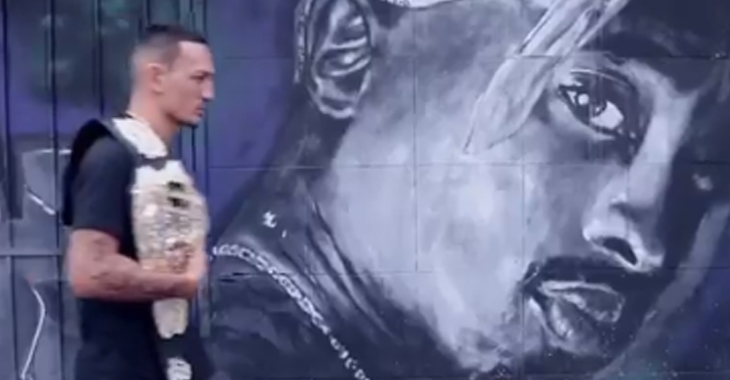 It is what it is! Dropping soon! @moskova pic.twitter.com/cCliKDFnfA

Fresh off the heels of the announcement of his rematch with Jose Aldo, UFC featherweight champion Max Holloway will drop a shirt thanks to a collaboration with Moskova. When Frankie Edgar unfortunately had to pull out of the initial fight due to an injury, the former featherweight king was put in as a replacement. Holloway just shrugged and said, ‘It is what is is.’ Joe Rogan recently went off about how much of a savage Holloway was for his reaction, now it looks like the champ is going to capitalize on the new catchphrase with some merchandise. By the way, it’s inspired by Tupac’s “All Eyez on Me’ album art and it’s awesome.

All eyez on me. #worldwide pic.twitter.com/812wrJYrzt

In the video, you can even see Max Holloway leaned up on a chair in the studio getting the photo homage to the West Coast rapper just right. The watch, the chain, it’s all there. It’s all Shakur. It’s probably the most creative MMA fighter t-shirt that’s been produced in recent memory and couldn’t come at a better time. Possibly beating Anthony Pettis and then Jose Aldo twice is a row could be huge for Holloway. Before that, he’s beat Ricardo Lamas and Cub Swanson. That’s an incredible streak.

The only notable featherweight contenders Max Holloway hasn’t fought in his ridiculous 11-fight win streak (15 total UFC fights) are Frankie Edgar and Brian Ortega. Of course, a potential title defense against Edgar will have to wait until next year. Ortega remains in his fight with Swanson that could also grant the winner with the next shot after former three-time title challenge Edgar.