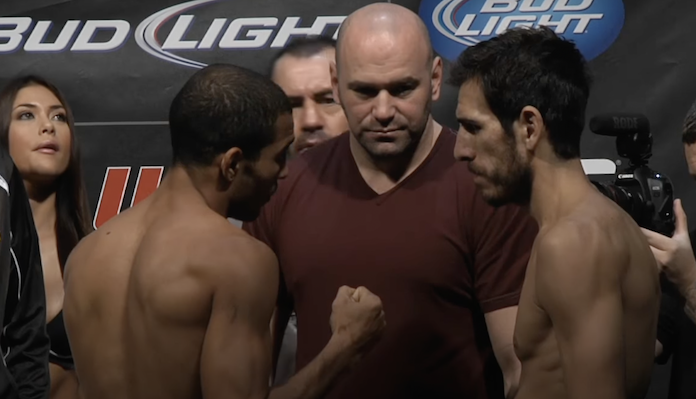 Kenny Florian praised his former opponent Jose Aldo, calling him a “master of mixed martial arts” for his UFC career resurgence at age 34.

A year ago at this time, Aldo was riding a three-fight losing skid to Marlon Moraes, Alexander Volkanovski, and Petr Yan. It made some observers of the sport feel as though he was in a huge decline, especially after seeing him get brutally stopped by Yan at UFC 251. However, since that three-fight losing skid, Aldo has looked better than ever. Now established as a bantamweight, the former UFC featherweight champion has won his last two fights against top contenders Marlon Vera and Pedro Munhoz. He looks better than ever at 34 and recently called out TJ Dillashaw for a No. 1 contender fight at 135lbs.

One of Aldo’s past opponents, Florian, recently spoke to MMA reporter James Lynch and praised Aldo for what he is doing this late into his MMA career. Having made his debut in the sport back in 2004, to see Aldo still be an elite fighter this many years later is awe-inspiring for many of his peers, and Florian had nothing but good things to say about Aldo.

“It was brilliant to watch. Jose Aldo is such a talent and I’ve always been kind of waiting for that Jose Aldo who used to throw a lot of leg kicks, and a lot of kicks in general. I think we saw the best Jose Aldo we’ve ever seen (against Munhoz), especially in round three of that fight. He was on fire against Munhoz. I thought there was a nice build-up to his fight. He was perhaps a little bit more reserved in round one (but) he just showed that he is truly a master of mixed martial arts. When he’s at his best, man, especially in a three-round fight, he’s going to be very difficult to beat,” Kenny Florian said. “It shows his mindset to carry this type of hunger and this type of passion for the sport. I think he made his MMA debut like 17 years ago or something, his first pro fight. So to see that he’s still here competing at this high level in the UFC, it says a lot about him as a martial artist, as a man, as a professional. I’ve said this on the podcast, and this is the most d’uh statement of the year, but he’s for sure going into the UFC Hall of Fame. He’s going to go down as one of the best featherweights and bantamweights ever. It’s a pleasure to watch him compete. It was an honor to compete against someone like Jose Aldo who will go down as one of the GOATs.”