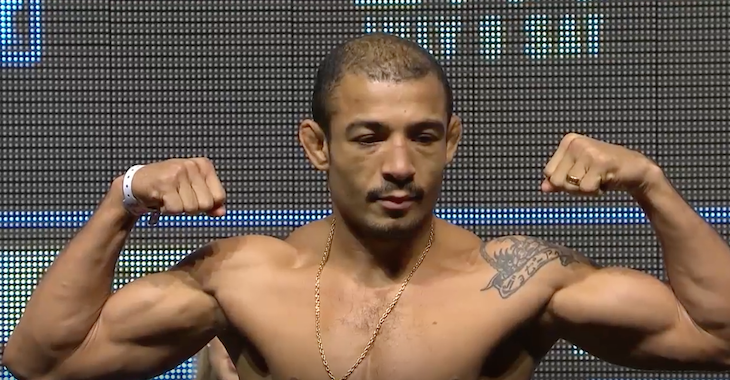 Jose Aldo is no longer the UFC featherweight champion. That title now belongs to Hawaii’s Max Holloway who defeated the Brazilian great back in June.

Now several months removed from his loss to Holloway, Aldo is beginning to weigh the options for his return to action. Given that Holloway is likely to be taking on Frankie Edgar next, Aldo seems to like Cub Swanson as the opponent for his next fight.

“Yes, Cub is an option,” the former champ told MMAFighting.com. “I think the ranking continues the same, there’s nowhere to run. Cub is well ranked, especially to be a challenge for me. Frankie (Edgar) will probably fight Max, so we can fight and a new contender will emerge.”

Surprisingly, Aldo added that, for the moment, he’s not too concerned with the title. Instead, he just wants to get back into the cage and get a win.

“First of all, I still don’t think about fighting for the belt or not,” he said. “I think it has restarted for me. It’s in the past. It’s like if I was entering the division again. I want to come back to fighting, come back to winning, and then we can sit down and talk to see where I am.” Finally, Aldo explained that he expects a second meeting with Swanson to be very different from their first fight, which occurred back in 2009 and saw Aldo win by knockout in just eight seconds.

“Both athletes changed a lot (since that fight),” Aldo explained. “It will be a new fight, a new story. I respect everything he’s been doing in the UFC, and we have to train a lot to face a really tough opponent.”

Would you be interested in seeing Jose Aldo and Cub Swanson fight? If so, who do you think wins?