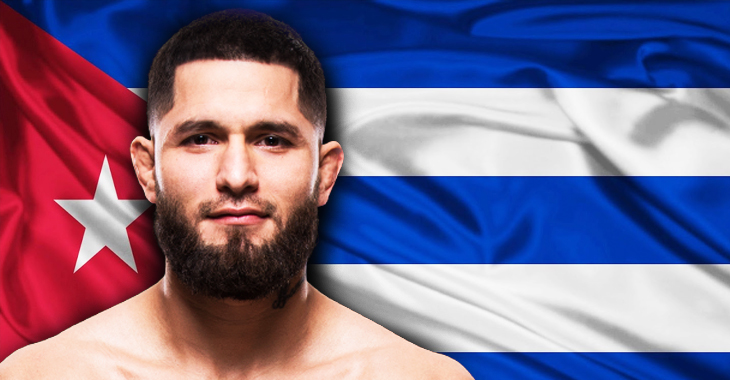 Slated to fight welterweight contender Stephen Thompson at UFC 217, it’s a middleweight that Jorge Masvidal has on his mind. Not just any middleweight, but one he will share that November card with. Michael Bisping ripped up a Cuban flag while watching Yoel Romero’s fight with Robert Whittaker at UFC 213, something Masvidal vented to us about on our BJPenn.com radio show. The desecration of the flag still rubs Masvidal the wrong way, so bad that he’d be willing to fight Bisping for a couple of double cheeseburgers.

“That ‘B-tch’-ping Michael [Bisping], whatever, The Count, you know, he’s a little b-tch, he needs to get slapped up, man. He needs to f-cking man up for this sh-t that he did, you know? Ripping my country’s flag for no reason and then saying corny ass sh-t like, ‘well, the flag just happen to be there.’ My ass! You put that sh-t in your pocket and you probably brought it in. He’s such a corny dude. He does corny things like that like, like to another man that’s just finished fighting, you know, that nothing can happen. There’s more security in there than in the White House and you’re acting crazy like that? That’s not man sh-t. I would respect him if he did that on the solo, like in front of Yoel [Romero] or in front of me or anybody that reps that country and did things like that. I mean, he’s just a hoe, man, since even before that, spitting on people’s corners.”

Fuck #bitchping @bisping has every Cuban on him now. It's #hoslap on site. Keep your ass in LA don't come this way https://t.co/X4X0qEyzPa

“Who are you? Why would you do that? Maybe in England spitting on people is like acceptable, I don’t know, but here in America you get killed for sh-t like that. You know? You don’t spit on people, especially people’s corners. So, I just think that’s the number one hoe I gotta slap, man. And if god is with me and I get to get this title, I’m gonna break this dude’s face one way or the other. You know, I just gotta get in there and show the world what a hoe he is. I’m not saying that I’ll do it for free, because you never do nothing you’re good at for free, but I will fight that guy for like f-ckin’, I don’t know, take me to a McDonald’s and let me pig out and I’m fighting that guy. Just buy me a f-cking dinner and I’ll break that guy’s face.” — Jorge Masvidal on the latest episode of Submission Radio.

Too bad that a weight class (and a possible retirement) stands between this fight ever happening. At least we still get his big fight with Stephen Thompson. A win over Wonderboy will be just what Masvidal needs to get closer to Tyron Woodley’s welterweight title. The two will go to war in the historical Madison Square Garden venue on November 7th for UFC 217.