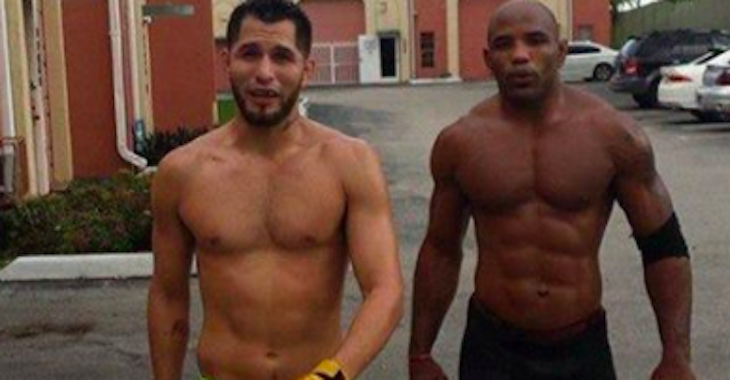 Jorge Masvidal hasn’t been quiet about wanting to ‘slap up’ Michael Bisping. The two have been in multiple confrontations together, mostly stemming from Bisping’s mind games aimed at Masvidal’s teammate Yoel Romero, which included ripping up a Cuban flag. He even offered to fight the former UFC middleweight champion at UFC Shanghai, if Kelvin Gastelum couldn’t make it. Lately though, things have been quiet. However, that’s only because the talk has transpired in private. Well, until now. Masvidal just posted his DMs with Bisping trying to get a fight.

Jorge Masvidal: “Hey hoe ass Michael Bisping, quit talking sh-t to me when the UFC team and staff and act like a man. Let this 155-pound end your racist ass, you punk b-tch. You rip my flag and spit on Latin fighter’s corners. Damn right you won’t get in there with me. You know I’m going to hurt you and keep hurting you. Not going to knock you out quick, hell no, I’ll punish your ass for disrespect you bring. Just sing pussy, don’t run your mouth or from the fight. You had your chance to talk like men in private and you chose to make a scene in front of fans and UFC staff. You’re such a hoe.”

Michael Bisping: “F-ck you, little b-tch. Get a life you sad f-ck.”

Bisping: “You’re a funny guy. I’m not wasting my time on an absolute nobody that nobody cares about. Quit trying to get famous by dropping my name.”

Masvidal: “I could be nobody, but this nobody will f-ck you up and you know it. Quit talking to me when you see me.”

Of course, this interaction is fresh on the heels of Michael Bisping’s back-to-back losses, but he still claims he has one last fight left before he walks away from the sport. A lot of fighters, Jorge Masvidal included, will be jumping at the chance to perhaps get a win over Bisping on their belt before he’s gone for good. While there has been no discussions about who the former champ would fight presumably in London, it’s safe to assume the Brit will be eyeing the biggest fight possible.

Prediction: Gets offered the fight turns it down Prediction 2: All corny welterweights start calling on thy name ……….. 1. I know a lot of you fighters grew up watching me. STOP trying to be me you know who you are…. this is to ww’s in particular 2. Stop being #corny 3. Enjoy this little #gem between me and @mikebisping #BackyardstoBrightLights #gamebred #realisback