Jon Jones says he will be on the sidelines for at least another year.

After Jones vacated his light heavyweight title last year, the plan was for him to move up to heavyweight and face the winner of Stipe Miocic vs. Francis Ngannou 2. However, ‘Bones’ wasn’t able to reach a deal with the UFC, and now suggests that he won’t be fighting again until 2022. 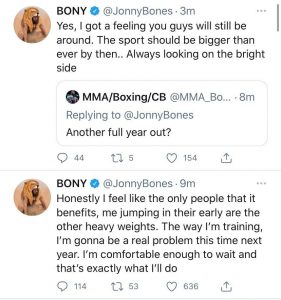 “Honestly, I feel like the only people that it benefits me jumping in their early are the other heavyweights. The way I’m training, I’m gonna be a real problem this time next year. I’m comfortable enough to wait and that’s exactly what I’ll do,” Jones wrote.

When a fan asked Jones if he will be out for another year, he said that would likely be the case.

“Yes, I got a feeling you guys will still be around. The sport should be bigger than ever by then. Always looking on the bright side,” Jones added.

It is no doubt disappointing news for many MMA fans as they wanted to see ‘Bones’ fight at heavyweight in 2021. Jon Jones vs. Francis Ngannou would have been one of the biggest fights in recent memory and given would have provided Jones the chance to cement himself as the all-time GOAT.

However, due to the contract negotiations, the UFC will likely book Ngannou vs. Derrick Lewis 2 later this year, while ‘Bones’ waits on the sidelines.

Jon Jones has not fought since UFC 247 where he beat Dominick Reyes by decision to defend his belt. Prior to that, he beat Thiago Santos by split decision and Anthony Smith by decision to defend his belts after he reclaimed his title by TKO over Alexander Gustafsson. He also holds notable wins over Daniel Cormier, Shogun Rua, Glover Teixeira, Ryan Bader, Vitor Belfort, and Rashad Evans among others.

What do you make of Jon Jones likely not fighting again for another year?