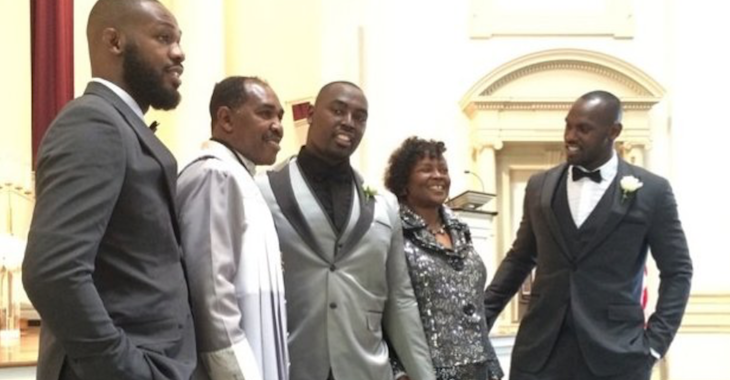 Tragic news surfaced Tuesday morning that Camille Jones, the mother of UFC pound for pound kingpin Jon Jones, and Super Bowl champions Arthur Jones, and Chandler Jones, passed away after a lengthy battle with diabetes according to TMZ.

Arthur Jones broke the tragic news via social media, with a heartfelt message asking fans to keep his family in their prayers during this difficult time:

“Mom, I love you so much! It’s hard to except the fact that my mother is not with me anymore she went to be with my sister in heaven. No more pain & suffering. Thank you for making me the man I am today! This Friday and Saturday will be the toughest weekend of my life. Please keep my family in your prayers”

Immediately, the MMA community, and sporting world both began to pour out their support for the Jones family during this difficult time.

Jones had a rather lengthy battle with diabetes, which saw Jon Jones reveal that his mother was forced to have her leg amputated the week before his fight with Ovince Saint-Preux at UFC 197 in April of 2016. Prior to his scheduled UFC 200 scrap with Daniel Cormier nearly a year ago, which was ultimately cancelled, Jones gave an update on his mother’s condition:

“It’s really tough for us to see your mom going through that. She’s had a lot of scares and we’re us praying for her and hoping that things get better. As of right now, she’s kind of in a stabilized position where things aren’t getting worse and things could be getting better for her. So we’re just hoping things continue on the up and up.”

Jones went on to reveal that as a result of diabetes, his mother had lost her eyesight, which was the reason for her no-longer being cageside at his fights.

We here at BJPenn.com would like to express our condolences to the Jones family, and will keep them in our thoughts during this difficult time.