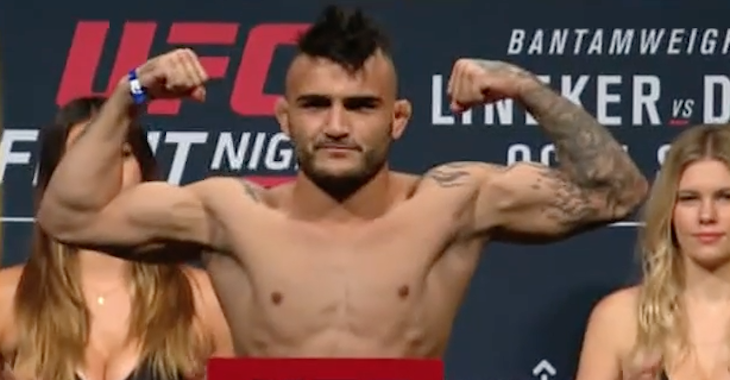 The UFC’s next event in Brazil is really shaping up to be quite the banger. Already stacked with Brazilian legends, the card is now getting a fight that will be guaranteed fireworks between bantamweight title hopefuls.

Fresh off his huge win over former champion, Renan Barao is Brian “Boom” Kelleher who called out John Lineker after his win at UFC on Fox 28 in Orlando, Florida. And as reported by Combate and confirmed by several other sources as well as the fighters themselves, that it shall be.

Kelleher put on quite the performance against the former pound-4-pound staple, Barao. If the fight had just a few more seconds left in it, it very well could have resulted in a knockout victory for the Selden, New York native, Kelleher.

This win puts him on a two-fight win streak and makes him 3-1 in the UFC so far. A win over the top-ranked Lineker would be just what Kelleher wants as he’s determined to become a champion one day.

For “Hands of Stone” John Lineker, he hasn’t fought since UFC Fight Night 119 in October when he defeated the last man to defeat Kelleher, Marlon “Chito” Vera. Lineker was scheduled to fill in for Dominick Cruz against Jimmie Rivera at UFC 219 but was forced out of the short notice affair with an emergency dental surgery for a tooth infection.

Pay-per-view cards that are hosted in Brazil always tend to be a treat for the fans of the country and UFC 224 follows that trend. Check out the card so far:

Which fight are you looking forward to most at UFC 224 so far? Who wins Lineker vs Kelleher?