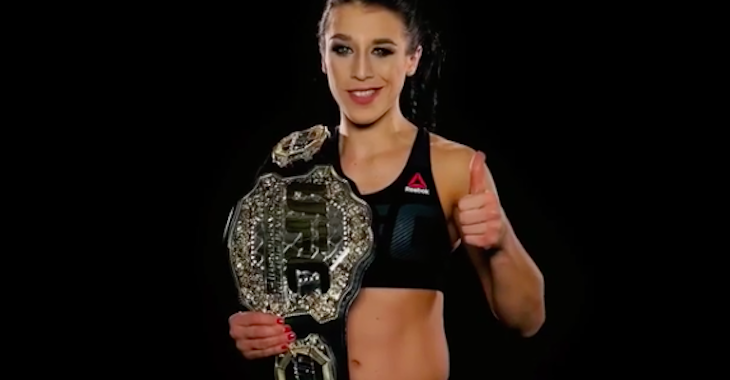 UFC strawweight champion Joanna Jedrzejczyk is one of the most dominant champions in the UFC today. Since winning the title from inaugural champion Carla Esparza with a violent, second-round beatdown, she has defended it with impressive wins against Jessica Penne, Valerie Letourneau, Claudia Gadelha, Karolina Kowalkiewicz and most recently, the dangerous Jessica Andrade. And while she still has a few big challenges remaining at strawweight, it sounds like she may begin a reign of dominance in the UFC’s newly announced women’s flyweight division too.

The champion of this new flyweight division will be crowned on an upcoming season of The Ultimate Fighter, and apparently, Jedrzejczyk is interested in fighting that inaugural flyweight champ sometime next year.

“We heard about the new flyweight division, so maybe next year I will face a 125-pounder, and maybe I will fight for the second belt,” Jedrzejczyk said in a recent interview with TMZ.

Jedrzejczyk’s inspiration on this mission, of course, is Ireland’s Conor McGregor, who become the first UFC fighter to hold titles in two weight classes concurrently back in November, when he won the lightweight title from Eddie Alvarez while he still held the featherweight title.

“I want to be like Conor McGregor,” she said. “I like to challenge myself. And definitely Conor sets a good example of hard work and big challenges. I want to reach that as well. I want to be a champion in two different divisions.”

Before Jedrzejczyk moves up to the new flyweight division, she will likely have to defend her title against the ever-improving Rose Namajunas, and perhaps in a rematch against the winner of Claudia Gadelha and Karolina Kowalkiewicz’s UFC 212 co-main event bout.

Do you think Joanna Jedrzejczyk can follow in Conor McGregor’s footsteps and become a two-division UFC champion? Make your opinions heard in the comments section!