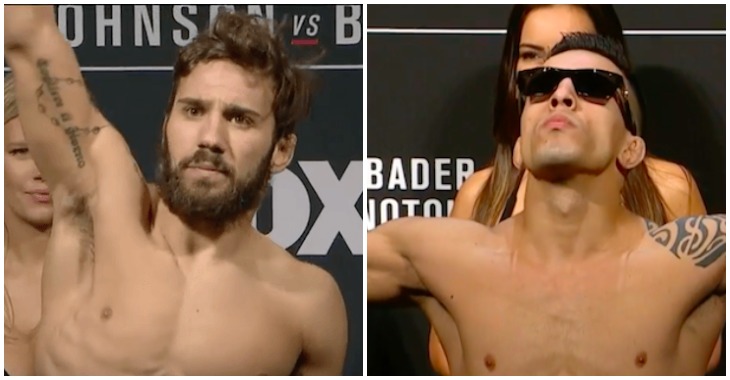 On July 22, the UFC will make its anticipated debut in Long Island with UFC on Fox 25. Over the last few weeks, the card has begun to come together, and today, it’s being reported that the lineup has grown by one crucial bantamweight fight. This fight will pit New Jersey’s Jimmie Rivera against Brazilian destroyer Thomas Almeida.

This report comes from NewsDay.com.

At a glance, Rivera and Almeida have two of the most impressive records in the UFC. Rivera currently sits at a fantastic 20-1, while Almeida owns an overall record of 22-1. Granted, the majority of the pair’s wins have occurred outside the UFC’s Octagon, where the competition is less fierce, but both have now proven themselves as two of the finest bantamweights in the world.

Rivera will enter this fight having not lost since 2008, when he gave up a split decision in his second pro fight. Since joining the UFC roster in July of 2015, he has gone 4-0, first knocking out Marcus Brimage, then defeating Pedro Munhoz, Iuri Alcantara, and most recently Urijah Faber, all by decision.

Almeida, meanwhile, has gone 5-1 in the Octagon. In his debut, he defeated Tim Gorman by unanimous decision. In his next three fights, he authored thunderous, strike induced stoppages of Yves Jabouin, Brad Pickett and Anthony Birchak. In his next fight thereafter, he experienced the lone loss of his career, losing by knockout to reigning bantamweight champion Cody Garbrandt. He has since rebounded from this loss, defeating Albert Morales with second round strikes back in November.

As the UFC’s fifth and ninth-ranked bantamweights respectively, the winner of this fight is likely to be right on the cusp of a bantamweight title shot. The next bantamweight title fight will occur on July 8, when Garbrandt attempts to defend his title against rival TJ Dillashaw.

Who do you think wins this Jimmie Rivera vs. Thomas Almeida scrap?