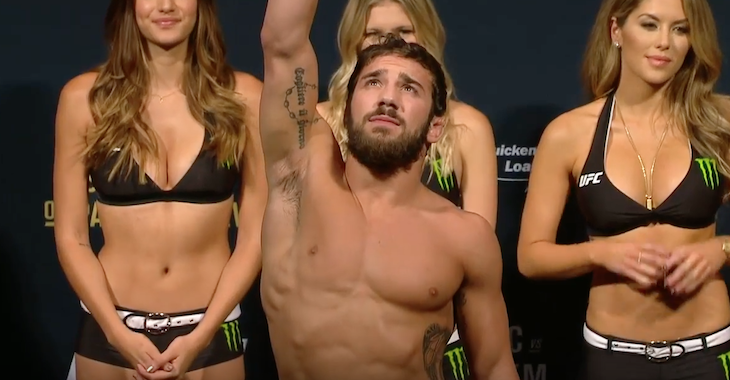 The UFC’s year-end mega card has taking more hits than most of it’s roster has had, but it is slowly being built back up. One of the bouts that ended up having to get split up is Dominick Cruz’s return to the Octagon against Jimmie Rivera, which was called off because of a broken arm Cruz suffered in training. Lots of fighters offered to step up including Marlon Moraes, Aljamain Sterling and John Lineker. Just earlier today, it was reported that a bout could be finalized soon, but now UFC officials have confirmed to Adam Hill of the Las Vegas Review-Journal today that the replacement bout is officially moving on with Lineker.

UFC is working towards booking Jimmie Rivera vs. John Lineker for UFC 219 on 12/30, according to sources. Not finalized yet but moving in the right direction. Hoping to finalize very soon.

“I would fight with Jimmie Rivera. I’m at the UFC’s disposal to fight him. I’m ready. I want to fight again, and it’ll definitely be a different fight from my last performance against Marlon Vera. I’ll be more in the rhythm and John Lineker will fight as he always has: aggressively. All the time, I am ready. […] I think I’m not far from a title fight and a rematch with [TJ Dillashaw]. I think that my victory over Marlon Vera has put me back into the mix, and I believe that another one or two wins and I’m in talks again to fight the champion.” — John Lineker speaking to FloCombat.

What can’t be said about Jimmie Rivera that you may not already now? He’s on an obscene 20-fight win streak and was lined up for the biggest fight in his career. Somehow though, he has yet to run into heavy-handed John Lineker. The bantamweight contender has only lost to the champion TJ Dillashaw in his last eight fights. He’s ranked fifth in the rankings just under Rivera, a win over him will shoot him right up into title contention. Forgoing a superfight with Demetrious Johnson, Dillashaw will have some clear cut challengers to fight with for his belt.