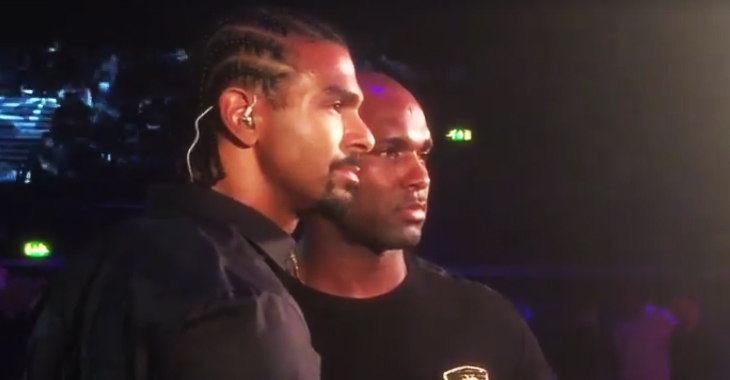 For all of you who thought Conor McGregor and Floyd Mayweather was just a one-off thing, you may be wrong. As with many other things, McGregor seemingly has opened up the floodgates when it comes to MMA fighters crossing over to MMA. Jimi Manuwa has been talking about a possible match-up with heavyweight boxer and multiple-time champ David Haye for awhile, but it looks like it is finally happening. Just last night at a BAMMA fight card, the two fighters got together for a talk and photo-op to announce they could fight as early as next year.

“The fight is on. He wants it and I want it and all that. He says he has to fight a couple more fights before we’re going to fight. We’re going to do it beginning of next year.” — Jimi Manuwa speaking to MMA Uno.

Jimi Manuwa planned on boxing Haye after getting a title shot, but a lost to Volkan Oezdemir and the Jon Jones situation may have changed his timetable. David Haye plans on at least fighting Tony Bellew for a second time before committing to a date for a bout with the UFC light heavyweight. It makes you wonder if Dana White’s ZUFFA Boxing t-shirt was just a clever one-off to wear during Mayweather/McGregor, or if the UFC is really going to try and put on boxing matches.

“Floyd [Mayweather] is the man for a reason. He played cat and mouse with [Conor] McGregor and toyed with him on his way to a tenth-round TKO. What that huge event has done is show there is a market for such crossover bouts. There has even been talk I could fight a guy from UFC called Jimi Manuwa. Both he and the boss of UFC, Dana White, have said it would make an interesting fight and, I admit, it does interest me.” — David Haye writing his own words for The Metro earlier this month.