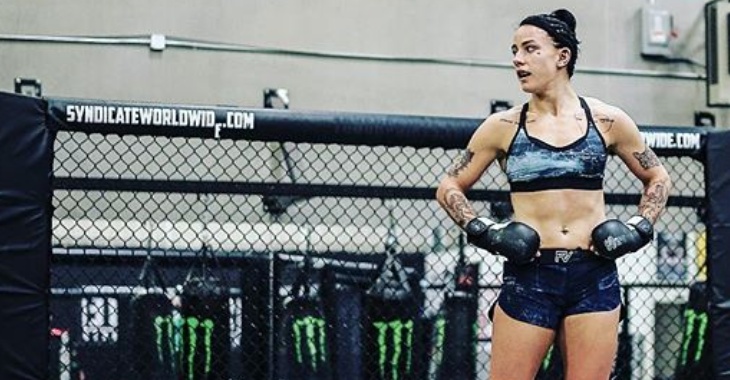 Round one began with a brief feeling-out process. VanZant looked for kicks, while Clark favored a boxing-based approach. From there, Clark landed a big takedown, taking the fight to the ground. After briefly chasing an arm-triangle choke, the Australian rode out the round from side control, and put a stamp on things with a few forearms to the face in the closing seconds.

In the second, VanZant showed no signs of decreased morale, coming out strong and cracking her foe with a spinning back-fist. From there, VanZant made the surprising choice to ground the fight, despite being controlled on the mat for the duration of the first. This proved to be a big mistake, as Clark was promptly able to work her way back into top position. From there, she rolled into position to threaten with a triangle choke from the bottom. Though this choke looked deep, VanZant hung in there, and even landed a bit of ground and pound as the round wore down.

Spinning back fist from @PaigeVanzantUFC lands, then she gets JRC to the ground! #UFCSTL pic.twitter.com/xh50dh4W4t

PVZ in between rounds: “I broke my right arm.” 😳#UFCSTL

After telling her corner she broke her right arm in the first round, VanZant gamely returned to the centre of the cage for the third round that occurred almost exclusively on the feet. Though the American unleashed some flashy offense in this third frame, it was Clark who pressed forward for the duration, landing the more meaningful thoughts.

By the time the final bell chimed, Jessica-Rose Clark had done more than enough to sway the judges, and was awarded a unanimous decision win for her impressive efforts. Given that some lowly scum robbed her home and killed her cat in the midst of this UFC St. Louis fight week, her performance was made all the more impressive.