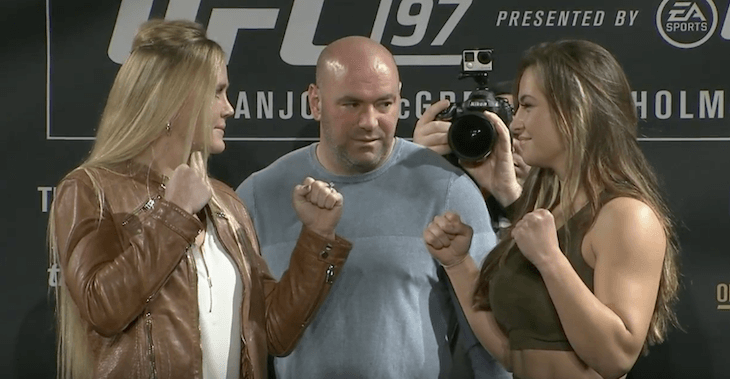 It seems like the championship lifestyle is finally catching up with Holly Holm, at least a little bit. The UFC women’s bantamweight champion was told by the former champion Ronda Rousey that she would be much happier in life if she stayed a contender, as the life of a champion has a taxing schedule aside from just training and fighting.

However, Holm did make it known that she did not want to wait for a rematch pending Rousey’s schedule to recover and finish her movie projects. Holm got her wish when the UFC booked a fight for her against Miesha Tate at UFC 196 on March 5.

“I don’t like to wait that long,” Holm recently told MMAjunkie. “Right now I have a fight, and I have a really busy March and April, and I’m going on a girls trip in April, which is very much needed. Honestly, I would actually really love to not schedule a fight or even think about it until after all that. I went straight from the victory tour to the on-sale tour for this fight, which is how I like it. I want to be active. But I could use maybe like six weeks.”

With some time off and not having to constantly have an opponent on her mind, it could be a nice refresher for the 34-year-old champion.

“(I won’t take time) off of working out,” she said. “I still like to work out, but (I want) six weeks with not having to actually think about a fight. Then we can schedule one. I don’t really need that much time off because then I start to think, ‘Well, what’s my purpose? What’s next? Let’s go.’”

Do you think Holm will get her time off after UFC 196 still holding the UFC belt? Or will Miesha Tate be the next to bring her life of martial arts training to the ultimate level and become a UFC champion? Share your pick with us in the comments!