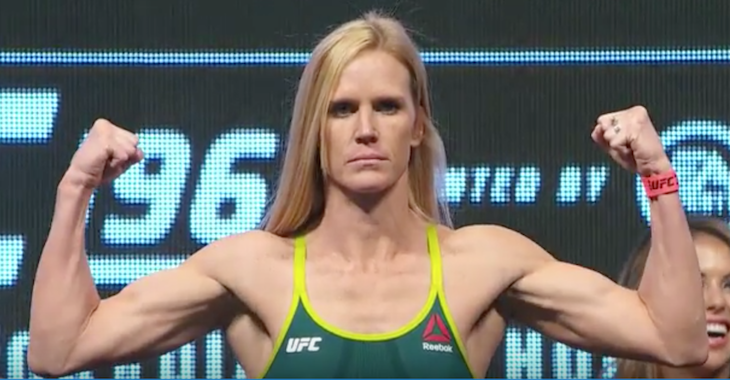 While Holly Holm has been very open about fighting Invicta FC champion Cris Cyborg in the past, the former UFC women’s bantamweight champion has a different opponent in mind for her next fight. After losing her championship to Miesha Tate in the co-main event of UFC 196, Holm is eyeing a rematch with ‘Cupcake’ sooner rather than later.

Ultimately, it was announced that the UFC had signed Cyborg to fight Leslie Smith in Curitiba Brazil at UFC 198.

Holm’s manager, Lenny Fresquez spoke to the Albuquerque Journal to discuss the situation:

“Miesha was in Australia on vacation, so they were supposed to get with her this week,” Fresquez said. “Hopefully, in the next couple of weeks we’ll know.

“But whether it’s Miesha or Ronda, those are the fights we’re interested in.”

“(Fighting Rousey or Tate) is pretty much what Holly wants to do. If they have something else, it’s my job to present it to her. I’ve made her wishes known to them.”