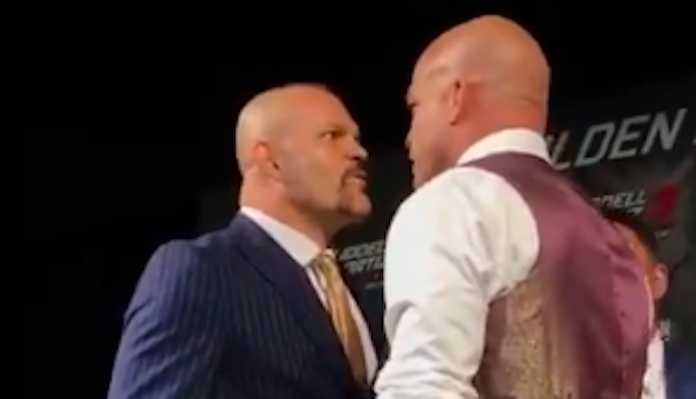 On November 24, Chuck Liddell and Tito Ortiz will meet for a third time. Ahead of this trilogy fight, we’ve seen several snippets of Liddell’s training, and many members of the MMA community are quite concerned about it, worrying that the 48-year-old Liddell looks alarmingly slow.

Jason Parillo, one of the key coaches of Tito Ortiz, has seen this footage and had similar thoughts, wondering if Liddell might be attempting to give false impressions of himself ahead of the fight. He called the footage “hoax-y.”

“I know he puts out some of it – we see a little training footage and some of it looks a little hoax-y, in my opinion,” Parillo told MMAFighting.com (transcript via MMAMania). “Sometimes, I think he’s playing a little bit of possum, or maybe he’s going full board.

“Either way, Chuck’s a fighter. Not that he’s not an athletic man. He’s strong, but he’s a fighter. The guy’s got a fighter mentality, and he goes out and he tries to kick your ass. That’s the guy we’re getting ready for.”

While the Tito Ortiz coach is doubtful about Chuck Liddell’s training footage, he isn’t sleeping on the former UFC light heavyweight champ.

“Do we think that he’s added some tricks and some tools to his bag of tricks? I don’t know,” he said. “How much can you really add? If there is such a thing as ring rust, which some people believe and some people don’t, my guess is he’s gonna feel a little bit of it.

“With the age, I don’t know how the skin and is gonna hold up and how (his chin) is gonna hold up, because I know that he’s been hurt quite a few times in his last couple of fights before his comeback, so we’ll see. We’re just training for the best Chuck Liddell that we’ve ever seen.”

How do you think Chuck Liddell and Tito Ortiz will look when they collide on the November 24?