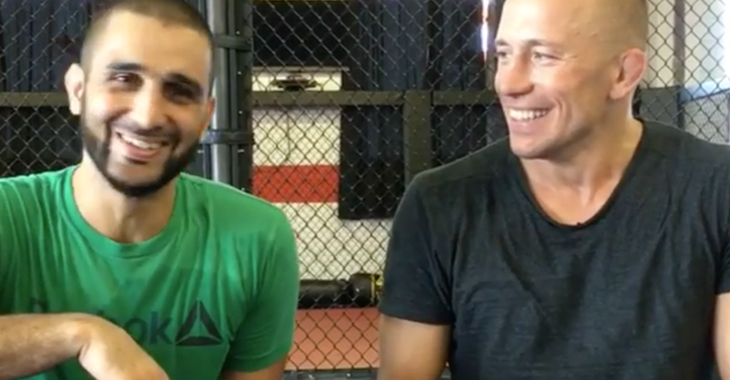 We’re now less than 48 hours from the main event of the historic UFC 205, which will see UFC featherweight champ Conor McGregor challenge lightweight king Eddie Alvarez in a bid to become the first fighter in UFC history to hold two titles in two weight classes simultaneously.

In the buildup to this fight, many of the game’s top fighters, coaches and pundits have offered up predictions on its outcome. The latest figures to do so are famed MMA coach Firas Zahabi, and his star pupil, former UFC welterweight champion Georges St-Pierre. The two Canadian MMA stars made their predictions from inside TriStar gym in Montreal, Quebec, Canada.

Though Zahabi and St-Pierre work together beautifully as coach and fighter, they were divided when it came time to make their predictions for this fight. Zahabi offered his thoughts first.

“I think it could be a blowout either way, but I’m going with Alvarez,” the renowned MMA coach said. “I think it’s going to go past round one and a half, two. I think McGregor has a chance to knock him out early, but if he doesn’t it’s going to be Alvarez, and I think Alvarez is going to get past the half way mark.”

St-Pierre made his prediction next, and was evidently keen to play devil’s advocate. He picked McGregor to win on the basis of his power and accuracy.

“Just to contrast with you like last time, I’m going to go for McGregor,” the former champ said. “I want McGregor. McGregor is my boy, but I like Alvarez. If Alvarez follows his game, if he’s smart and he fights well he might win, but I think he’s going to be taken out of his game plan by [McGregor] trying to knock him out. McGregor is very precise.”

Do you agree with Zahabi, or with St-Pierre? Sound off in the comments, PENN Nation!