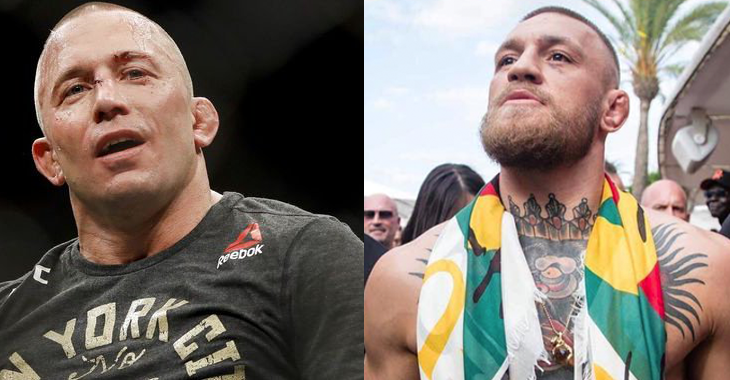 Would a Conor McGregor and Georges St-Pierre matchup be the biggest fight in UFC history? It would certainly make for an interesting match of styles and with both fighter’s star power, it would definitely make for some massive numbers.

St-Pierre’s longtime Tristar Gym coach Firas Zahabi spoke with Express Sport recently on the matchup that he says he has been interested in this fight for St-Pierre for some time.

“I don’t think that’s crazy. I’ve been asking for that fight for over a year and a half now,” Zahabi said.

While Georges himself isn’t campaigning for a fight with “The Notorious,” Zahabi said that both McGregor and St-Pierre’s accomplishments are incredible and that it just make sense for them to go at it in the Octagon.

“He’s got the touch of death in his hands. He knows what he’s doing, he’s highly intelligent, highly captivated, he’s extremely dangerous. And I don’t think he fears anybody.

“So I think him and Georges would be a phenomenal fight.”

It would be tough for any other matchup to sell like a McGregor vs. St-Pierre superfight and Zahabi believes that the two would hold the record for some years to come.

“It would probably be the biggest fight in UFC history and MMA history,” Zahabi added. “And that record wouldn’t be broken for ten years. So why not do it?”

What are your thoughts on a Conor McGregor vs. Georges St-Pierre superfight? How and when would this one end? Let’s see what the fans have to say about this one in the comment section!