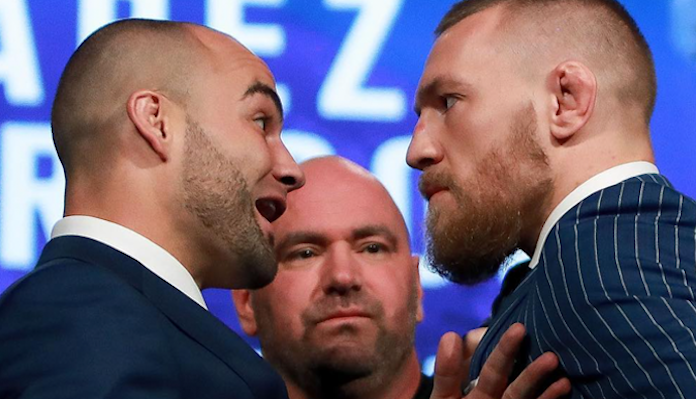 Conor McGregor‘s legal situation is now cleared up. This means that the Irish MMA megastar will soon be able to return to the cage — if he so chooses.

If McGregor does return to the cage, it’s almost certain that he’ll return to a title shot opposite reigning UFC lightweight champion Khabib Nurmagomedov.

Not everyone, of course, feels McGregor deserves that chance. The Irishman has not competed in mixed martial arts since November of 2016, when he knocked out Eddie Alvarez to win the UFC lightweight title. In the eyes of many fans, this layoff is significant enough that McGregor should be required to take a contender fight before receiving a title shot.

“Nope,” Alvarez told MMAjunkie when asked if he’d be disappointed if McGregor got the next title shot. “That is the world we live in today, folks. We are all fools if we think otherwise.”

“Brock Lesnar just walked in here and got a world title shot. This is what’s happening. We have no control – the media, myself, the fighters, no one. There is complete control. The UFC says who gets the next title shot. I have no control of that; I beat the guys in front of me. I could dominate everyone. Doesn’t matter. The money fight is what’s always going to count.”

Interestingly, Eddie Alvarez also admitted that he was happy to see Conor McGregor get his legal situation sorted out in a favorable way.

“It would be a sin for him to be locked up in his prime years, so I’m happy for him,” Alvarez said. “It’s good for the MMA world.”

Do you think Conor McGregor deserves a title shot upon his return, or should that honor go to the winner of Eddie Alvarez and Dustin Poirier’s UFC Calgary fight?