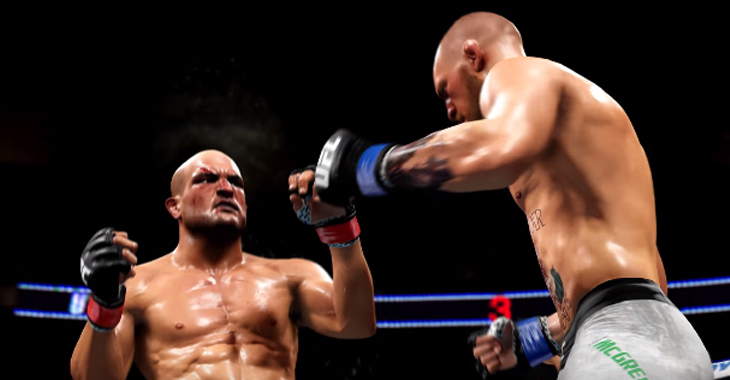 Fans spent a year and a half screaming at their televisions and rubbing their thumbs raw, fighting their friends and random strangers on the internet in EA Sports UFC 2. Even Demetrious Johnson got in on the fun against his Mighty Squad, Rampage Jackson and Max Holloway. For mixed martial gamers wanting a new experience, EA Sports UFC 3 drops in February and boasts tons of new features along with their updated roster. One of these updates is a completely new career mode. It’s no longer just about getting a belt, you’re trying to become the greatest of all time.

“What was missing in ‘EA UFC 2’ was a sense of, ‘When am I done? When have I beat the game?’ We now have a bar that determines your G.O.A.T status. The objective of career mode is to become the Greatest of All Time, and to do that you have to accomplish a certain amount based on long-term goals. You can do well in the octagon, but if no one pays attention to your fights are cares about you, you’re only going to make it so far.”

UFC 3. Become the GOAT inside and outside the Octagon.

“When you start career mode you start in WFA (World Fighting Alliance)  in 2017: By the time you get to winning your first UFC title, a fictional seven, eight or maybe nine years has gone by. The same amount of time has not gone by in real life; maybe two or three days. If we retire (fighters) along a realistic timeline, all the UFC fighters will be gone. Nine years from now, from the current top-15 in UFC in any division, who is still going to be around? Maybe one guy?” — Creative Director Brian Hayes speaking to MMA Junkie.

It’s no longer just booting up a created fighter, busting up some guys in The Ultimate Fighter show and heading to the big leagues. You start out in a regional organization called World Fighting Alliance. Just like the real fight game, you could be in there for a while, beating fighter after fighter until you get a big break. This could mean just a spot on the show, but if you are really slugging out guys in 13 seconds like Conor McGregor, you could skip straight into the UFC.

Also added to the game is a tournament mode for all those oldschool grand prix hardcores out there. They’ll be a knockout, kickboxing and even sub-only modes. Not only that, but they are still tweaking everything about the game from knockout physics to stamina bars after their feedback on the beta. The game will only keep improving all the way up until it’s hyped launch in the first half of 2018.

.@GeoffHarrower, lead gameplay engineer on #EAUFC3 highlights the 3rd round of updates based on beta feedback. pic.twitter.com/YEYTN9xbUW