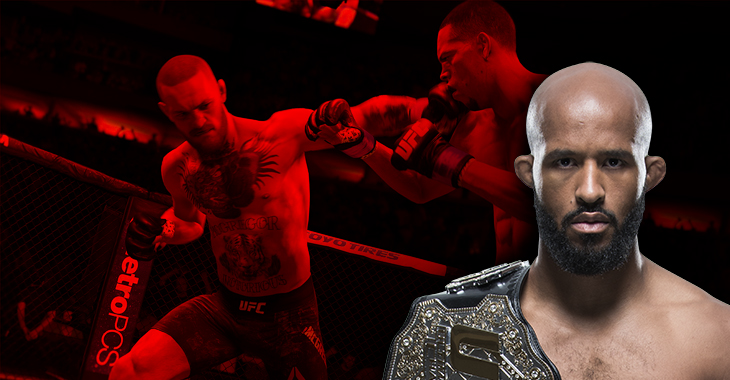 Stretch your hands, crack your knuckles and wrap your thumbs, a new UFC game from EA Sports is dropping soon. Luckily, you don’t have to wait until it releases in February, you can now download the open beta for PS4 and XBOX and train before the real fight day comes. If you get good enough, you could even log on and try to test your skills against the UFC flyweight champion himself. Demetrious Johnson just got the beta and has been playing against his fans online. The virtual Octagon is the only place where the man has suffered a loss in six years.

“My wife was like, ‘You should get into [streaming on Twitch] baby, what do you want to do after you’re done fighting? Why don’t you try streaming?’ Then Twitch reached out to me and told me everything I needed to get to be a serious streamer. All of the credit goes to my wife, she’s the one who suggested I do it. I decided if I was going to do it, I had to be 100-percent in. I didn’t want to do it half-assed and try to stream from my PS4 or Xbox One, so I bought a computer and she was all in, so I was like, ‘Let’s do it.”

“You have to think about what you’re going to do after your career. I’ve always thought about going back to work at a warehouse or whatever I need to do to make ends meet, but now streaming and video gaming is just kicking off. All I care about is the next game coming out next month. I’m still fighting, I’m in the prime of my career and train my ass off every single day, but I’m starting my second career now. Why not? I’m building my viewership and community now, so when I’m 38 years old and I’m done fighting I can have streaming as my main source of income, hopefully.” — Demetrious Johnson speaking to Kotaku last year.

When he’s not breaking records and putting on spectacular performances in the Octagon, he’s at home sipping on a frosty beer and playing video games live on Twitch’s streaming service. Whether you’re a gamer yourself or not, you can log on anytime to Demetrious Johnson’s Twitch account and watch him play wide variety of games from Dark Souls to PlayerUnknown’s Battlegrounds. You’d be surprised how good it makes you feel to see a dominant UFC champion get as frustrated as you do losing at a video game. Not only that, but it’s cool to see the down-to-Earth “Mighty Mouse” interact with his fans in a direct way.