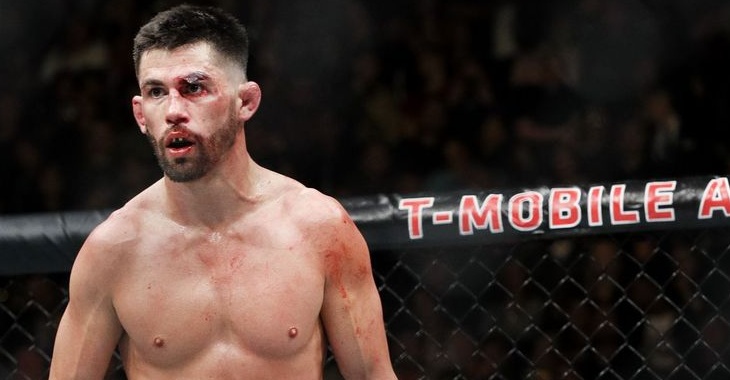 It’s pretty easy to argue that injuries have been Dominick Cruz’ biggest rival throughout his storied career(Urijah Faber may have something to say about that though…). Cruz is one of the greatest fighters to ever step foot in the cage and the fact that he still can is nothing short of miraculous. He’s come back from broken hands, torn ACLs, a torn groin and is now recovering from a broken arm that forced him out of his planned bout with Jimmie Rivera for UFC 219. Fortunately, it sounds like this has been an easier road to recovery for Cruz than some of his previous injuries!

“So I got cleared to start running and biking and probably throw some kicks every here and there. I’m not going to get to punch for another month but now I can start the rehab of the body, get everything back feeling in shape and then after this one month goes by where I can’t punch, i’ll ready be in shape when I get to start hittin’ pads.”

By now everyone should know Cruz’ backstory with his horrible luck with injuries. In 2016 he returned and reclaimed the title he never lost and competed three times in that year which was more than he had fought in the whole four years that came before it. In his most recent fight, he suffered the first UFC loss of his career to Cody Garbrandt in a great back and forth fight.

Cruz would take off all of 2017, hoping to get an immediate rematch for the title against either Garbrandt or TJ Dillashaw, or at least take a fight around the same time so that if he won there would be no unevenness in timing with all fighters(which turned out to be the plan until the injury).

Who should Dominick Cruz fight when he returns?