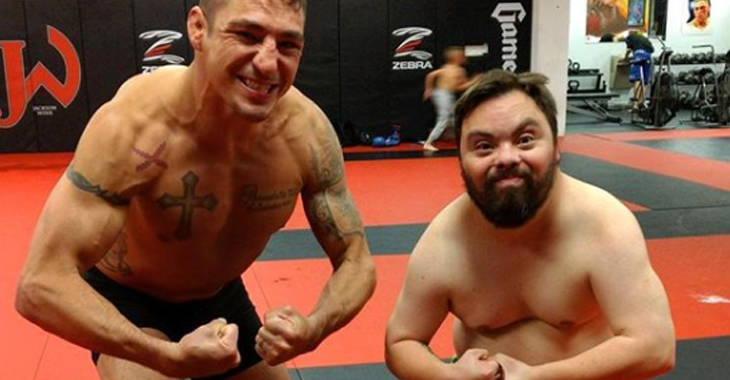 If you follow Diego Sanchez on social media, you may have seen him working with his friend [Isaac “The Shermanator” Marquez. Whether it’s working the pads, teaching some new secret moves, or practicing some ground and pound, Sanchez has been by Marquez’s side ever since he graced the doors of Jackson Wink. However, it was always more than a friendship and more than just having fun, Sanchez has been working towards fulfilling a dream for the young man and the work has finally paid off. UFC vet Diego Sanchez will be Marquez’s opponent for his big MMA debut.

@isaacmarquezabq gets his big fight!he is dedicating it to his mom who died of dementia. This champion is on of the most positive motivating men that I have ever crossed paths with! MMA IS HIS PASSION AND HE LOVES @UFC come watch him fight me

“[Isaac “The Shermanator” Marquez] came to [Jackson Wink MMA Academy] to just come and check out the gym and I told him, ‘You like MMA?’ and he said, ‘I love fighting,’ and then I said, ‘Alright. Well are you here to just watch or do you want to train?’ and he said, ‘I want to train.’ So, I said alright let’s do this. He believes it with all of his heart, so I am going to make it happen. You know, he will be facing me, so I will be his opponent and we are going to have a championship fight. Isaac [Marquez] lost his mother to dementia and if you ever talk to Isaac he will show you his tattoo. He is doing it all for his mom, and he is going to win the championship for his mom. So, that’s the kind of heart that this kid has.” — Diego Sanchez speaking to KRQE.

After all the training with the original Ultimate Fighter, Isaac Marquez makes his MMA debut on December 2nd at Isleta Casino and Resort on the Jackson Wink Fight Night 2 card against the man who taught him everything he knows. According to Van Tate of KRQE, Diego Sanchez received special permission from Dana White to be able to compete in this exhibition match. It’s not just about the fight though, this is the cherry on top of countless hours Sanchez has put in to change his friend Marquez’s life for the better. The special moment all goes down this Friday.

“Most down syndrome adults don’t live past 45.  Isaac is 32, and I just wanted to see this young man be healthy. Exercise and martial arts are one of the most healthy things you can do.” — Diego Sanchez.