The confident quotes and one-liners used to be endless from Darren Till, but a recent skid had him silenced as he figured out his best moved. During his run to a welterweight title fight against Tyron Woodley at UFC 228 in September of 2018, Till electrified the welterweight division with his most notable wins coming over Cowboy Cerrone and Stephen Thompson.

What followed after his run to the top would hold many fighters down, Till would come up short in his fight against Woodley and then he returned to face Jorge Masvidal earlier this year, but suffered a second-round knockout loss. After taking time off to decide on his next move, Till jumped, better yet, leaped into the deep-end of the promotions middleweight division.

Looking to get back into the win column, Till decided to jump up to 185 pounds but ignored the advice of many, including Dana White, and decided he’d face former interim title challenger Kelvin Gastelum for his middleweight debut. 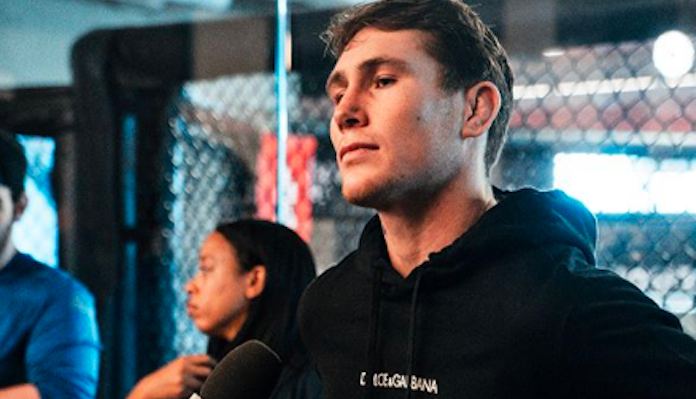 With the critics and others speaking up about Till’s decision to face Gastelum, who has a Fight Of the Year candidate against newly-crowned middleweight champion Israel Adesanya earlier this year, the mere fact that he chose to face Gastelum speaks volumes to who Darren Till is as a fighter.

Even more so, it might be his quotes from this small clip during an interview with BT Sport, that shows just who Darren Till really is. This quote, which was released by BT Sport following one of his workouts, doesn’t just show a fearless fighter, it speaks to the character of a brash, outspoken, and self-confident fighter looking to get back on track.

“Maybe I go in there and get absolutely blown out the water by Kelvin, so what? I’m taking a chance. I’m not afraid of anyone. I come to fight. I don’t want to submit him, I don’t want to take him down and lie on him for three rounds, I want to go out there and I want to f***ing punch a hole through his face and if I get knocked out in the process, so what? That’s my approach now. Because yeah, it is one of the toughest fights out there but I truly believe I can beat him as well and he knows I can beat him. He isn’t underestimating and if he is, f***ing bad luck to him.

“MSG, co-main event, the fans are still calling for it. You know, this could be, say it out loud, this could be the third loss. So what? I’m taking a chance, I’m going for glory.”

That doesn’t just sound like a confident fighter, that sounds like a fighter willing to risk it all, who has been at the top early on in his career, and is ready to truly give everything he has and risk another loss, to make a statement in a new division. It wasn’t just one clip however. As BT Sport has spent time with Till, there have been quite a few quotes from “The Gorilla” that show his brash nature and self-belief, that no matter what others think or believe, he’s not afraid to put it all on the line.

After suffering the first knockout loss of his career to Jorge Masvidal in March of this year, Till admitted that it effected his confidence for some time, but his willingness to speak on the knockout is just an extension of his confidence.

Till not only addressed the knockout with those around him but in the video below, he details the steps he took following the loss to Masvidal and how meeting with someone made him feel re-energized and rejuvenated.

There’s a cliche saying that a confident fighter is a scary fighter, and there’s also critics who will say that fighters who talk too much can’t always back up, but isn’t that what makes the danger that much more exciting? While Darren Till is a risk-taker, a loud and confident fighter, he’s also a martial artist who respects the sport and those on the opposite side of the cage from him.

At UFC 244 when Till makes his middleweight debut, a division that many thought he should be in after his loss to Tyron Woodley, he’ll do so with a high-risk, high-reward opponent across from him. The UFC bought in on Till during his run in the welterweight division and while recently things haven’t gone his way, Till’s belief in himself makes UFC 244 worth all the thrills.

The reality of what lies ahead of him is something Till hasn’t backed away from, and that’s why he doesn’t believe a win over Gastelum should get him an immediate title fight.

However, those critics and doubters? Till promises that he’ll have a message for them if he beats Gastelum.

A message delivered, a fight ready, a fighter prepared to turn it all around. If for nothing else, Darren Till’s self-belief brings the excitement to a whole new level at UFC 244. Yes, the main event is spectacular, but Darren Till has been labeled the next big UK star for the UFC since Michael Bisping, and both have had tough climbs to the top. Till’s climb gets refreshed at UFC 244, and that’s why you shouldn’t miss (or blink) when he faces Kelvin Gastelum.