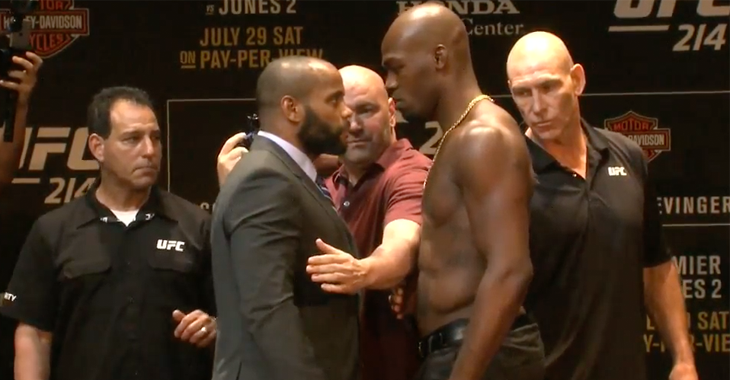 Back when Jon Jones finally came back and looked like the world-beater we all wanted him too, he was taken away from us nearly as soon as he arrived. He was able to finish Daniel Cormier and reclaim the title, then he called out Brock Lesnar. …But that fight never happened. Not only did a potential superfight go away, but so did Jones himself after a potential anti-doping violation that is still ongoing. A fight of that magnitude is now Daniel Cormier’s to carry. His fight later this year with Stipe Miocic is going to be historic and something no one — not even Jon Jones — can say they’ve accomplished.

“It’s never been done before. The crazy thing when [Jon] Jones beat me, he asked to fight Brock Lesnar and he also said, ‘Hey, you guys can’t force me up to heavyweight, it’s one thing to fight a heavyweight, a guy that’s big. It’s another thing to go up and fight a guy that’s big, but also really, really good.’ So, he didn’t seem too stoked on it. I think it just shows the difference in mentality.”

“Instead of saying I don’t know about it, he’s too big, he’s too good. I just say bring them on. Let’s do it. This gives me exactly what I’ve been pining for. I get this done, [and] everything I’ve always wanted, wished for, and hoped for, is not only a reality, but it’s my truth now. I can honestly say I am one of the greatest mixed martial artists of all time and have no reservations about it and no one can question it. They can only say, ‘You know what, he’s accomplished, he has that right, and he’s earned it.’” — Daniel Cormier speaking to MMA Weekly.

What Daniel Cormier is saying is actually true. When Jon Jones called out Brock Lesnar instead of Stipe Miocic, there was a strategy at play that Jones publicly talked about. It leaves the door open for Cormier to finally get one over on his longtime rival. Yes, he may have lost to him twice, technically only one time, but Jones is on record saying a fight with Miocic wasn’t a good decision and he’d prefer to fight a less skilled opponent. Cormier, on the other hand, is welcoming the challenge. We’ll find out July 7th if it was a smart move.

“I feel like if I was to take a fight at heavyweight, it would be against a person who I felt, and my coaches felt would be a perfect match-up for me. Right now Stipe [Miocic] is looking extremely impressive and I believe when you get an extremely talented big guy versus and extremely talented little guy, the cards are working in his favor. At the same time, I fear no man. But, I strike for a reason when I strike and I feel like right now Stipe is relatively unknown to the general public. So, it wouldn’t be a real super-fight in my opinion.” — Jon Jones speaking at the UFC 214 post-fight press conference.