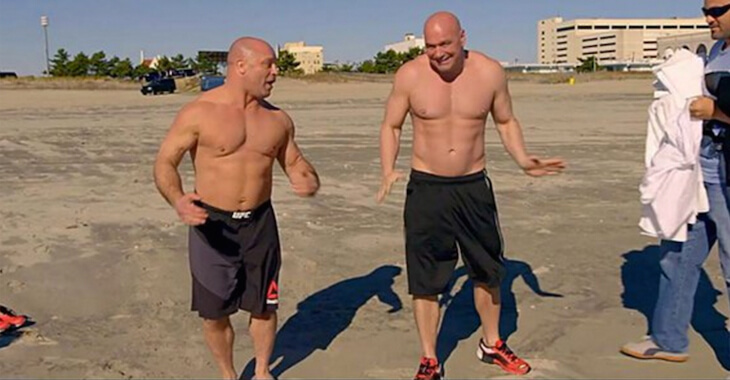 With all the fights the UFC puts on every year, UFC President Dana White still finds time to make sure he, himself, is staying in shape.

When White appeared shirtless in an episode of “Dana White: Lookin’ for a Fight,’ fans were surprised to see the UFC boss with a ripped physique.

White recently did a photo shoot for a feature in Men’s Fitness magazine where he is gracing the cover of their November issue.

Go behind the scenes at our photoshoot with @ufc boss @danawhite for the November issue of Men's Fitness: https://t.co/2H6gBuQ8et pic.twitter.com/aKaDfgy1x5

In a video segment Men’s Fitness did during the shoot, White said that he keeps active with boxing, but can’t go without getting in the gym to pump some iron.

“I like to box. I still box every day,” White said. “I do some cardio and I love to lift weights. I have to have a goal. I have to have. Whether it’s reps or weight, there has to be some type of goal for me.” Regarding weight cutting in the UFC, White says that they are heading in the right direction.

“The fighters bodies and weight has evolved a lot over the last several years, in that these guys are starting to cut closer to their weight. Weight cutting has always been a part of the fight game. I’d like to think that we’re getting better at it, and that’s evolving.”

Men’s Fitness asked White who he would have liked to see compete in his dream fight.

“Two fighters from any era…I’d probably throw a Mike Tyson in the mix,” White said. “I’d like to see Tyson and Chuck Liddell. “Over the last 16 years, I’ve seen so many great fights, it’s hard to pick just one. The heavyweight championship, Alistair Overeem vs. Stipe Miocic was awesome. I mean it’s everything you want in the heavyweights. Both guys get hurt, and then the champion, Stipe Miocic, defends his title in his hometown.”

As far as what he has accomplished with the UFC, White says that the vision that he and the Fertittas had has come to a realization and that the sport is continuing to grow.

“I’d have to say that I’m most proud of the fact that we did everything we said we would do. Sixteen years ago, me and my partners, the Fertitta brothers, set out to build this thing into a global sport, and we believed it could be the biggest sport in the world. We’ve achieved most of the things we’ve said, and we’re continuing to grow the sport every day.”

White was also asked, “Would you change anything going back?”

Lastly in the video segment, White gave insight as to what it’s like to run a company.

“To be the President of any company, you gotta jump out of bed every day ready to kick ass and you gotta love to win. You have to have a great team around you that believes in your goals and a team that wants to win and kick ass too.”