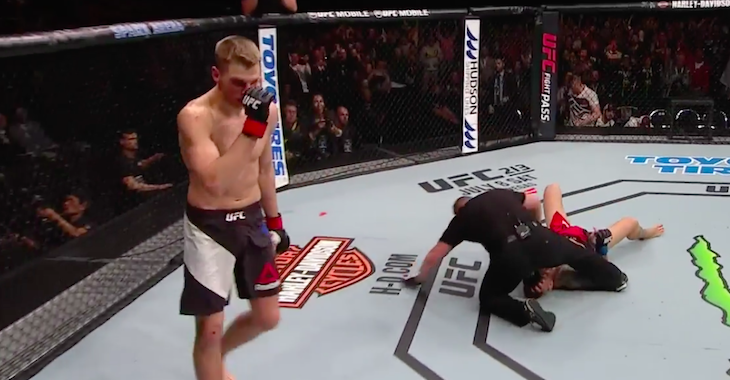 Last night, on the main card of the UFC’s latest trip to New Zealand, Kiwi star Dan Hooker made the jump from featherweight to lightweight, where he debuted against hard-nosed British veteran Ross Pearson. Despite being the much less experienced man in the cage, Hooker’s lightweight debut couldn’t have gone better, as he flattened his veteran foe with a crushing knee to the face mid-way through the second round.

Because it was so beautifully timed and executed, Hooker’s knee-induced knockout defeat of Pearson is being talked about by many fans and pundits as a knockout of the year contender. According to Hooker himself, however, it was just a lucky strike.

The Kiwi finisher assessed his finish at the UFC Auckland post-fight press conference.

“I just caught him with that knee,” Hooker told MMAjunkie.com at the presser. “[It was] lucky, nothing else.”

Hooker then explained that his jaw-dropping win in New Zealand can be largely attributed to a less taxing cut at lightweight. Apparently, he’ll never be returning to the 145-pound featherweight division.

“I just felt strong, I felt fit,” he said. “I felt like a completely different fighter. I felt like myself. That’s how I train. That’s how I compete in the gym, and when I’m not draining myself to get down to 145, it’s my natural weight into the fight. … I’m never going back to featherweight.”

Hooker then commented on the fan reception he received after his “lucky” win over Pearson.

“Looking after the finish and seeing the crowd and just hearing them, it’s the same as the [UFC’s] first show [in New Zealand],” he said. “That’s one of the loudest crowds I’ve come across. These New Zealand fans, they’ve got some lungs of them.”

What did you think of Dan Hooker’s incredible knockout of Ross Pearson in Auckland? Can we really call it luck or is the Kiwi just being humble?