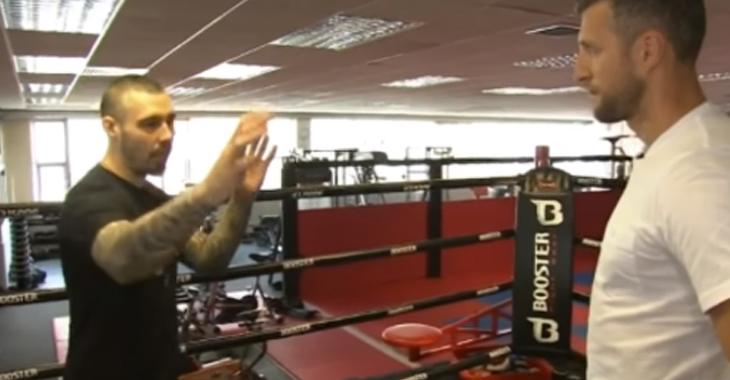 Last week, Dan Hardy got brought into the Conor McGregor vs. Floyd Mayweather fray and he quickly proved his worth breaking down the glove issue. The former UFC welterweight title challenger is back this week, analyzing the vast difference between the type of stance each fighter is going to come out with. We all know how uncanny Mayweather is, but is McGregor’s wide, Karate stance something that could actually frustrate Floyd? It seems silly, but Hardy doubles down that it can.

For all the talk of reach/unorthodox, @danhardymma is alone is pointing this out 👇🏻 Full column here https://t.co/LqTEWmlRqd pic.twitter.com/3y5tdGJ620

“His understanding of range is very different to Floyd’s. Everybody Floyd spars, and everybody he’s fought as an amateur and a professional, has been a traditional boxer. […] If you spar with a beginner in the gym they might hit you with shots that a long-time pro wouldn’t hit you with, purely because they come from different angles. It’s sometimes easier to spar someone who has some experience because you might predict what they’re going to do. This is what Conor will bring to the table. Expect Conor to do the opposite of what Floyd is expecting. Expect him to be calm, to take his time, to try to unsettle Floyd. That would be my advice.” — Dan Hardy for Sky Sports.

Despite Floyd Mayweather’s ridiculous stats in his last fights, there’s a case being made for having to adjust to something unexpected. Conor McGregor hasn’t really shown anything of his sparring tactics when it comes to boxing, and distracted everyone at his open workout with his impression of the inflatable arm tube man. Other than his MMA fights, McGregor’s approach is a mystery to Mayweather. That margin of the unknown is enough to sale the fight to some people, and something McGregor is banking on for sure.