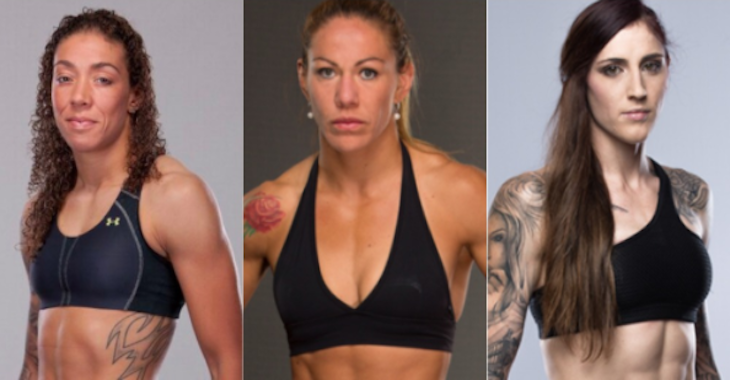 Back in February, Germaine de Randamie and Holly Holm collided to crown the UFC’s first-ever women’s featherweight champion. Though there was a definite asterisk attached to this title fight due to the fact that it did not involve Cris “Cyborg” Justino – the division’s consensus best fighter – it was an exciting time for women’s MMA all the same.

Unfortunately, the trouble for the new women’s featherweight division began almost immediately, as this inaugural title fight oozed with controversy.

After watching De Randamie land multiple hard shots after the bell, throngs of frustrated fans picked up their torches and pitchforks. When De Randamie won a debatable decision in spite of her fouls, the ire of these fans increased. When she stated in her post-fight interview that she would not be shifting her focus to a defense against Cyborg, and that she’d instead be taking some time off to deal with a hand injury, fans seemed ready to riot.

It was a disastrous opening night for the UFC’s women’s featherweight division, and unfortunately, things have only gotten worse since then. Immediately after she announced her plan to take some time off, De Randamie was lambasted by fans who suggested she was avoiding a fight with the destructive Cyborg. Cyborg made no secret of the fact that she shared this opinion. Yet instead of speaking up and combatting these claims, De Randamie disappeared from the limelight and parried attempts by reporters to get a clear picture of her plan.

During De Randamie’s absence from the limelight, Cyborg grew increasingly ornery, repeatedly reminding the world that she deserved a title shot. At first, the Brazilian bomber campaigned hard for a fight with De Randamie, engaging the champ on social media, and attempting to pressure her out of the shadows. Unfortunately for Cyborg, this plan failed, as De Randamie remained steadfast in her silence.

When it became clear that a bout with De Randamie was unlikely – particularly for UFC 214, a July card Cyborg has been campaigning to be on for months – she shifted her focus to reigning Invicta champion Megan Anderson. When Anderson agreed to this challenge, and even to Cyborg’s desired UFC 214 date, things seemed to be looking up for the UFC newest division. All the UFC needed to do, it seemed, was mail out the contracts.

Regrettably, the promotion has shown outright disinterest in this potential showdown. Instead, rumors have begun to surface that the UFC is reluctant to sign any new featherweights – which nixes the possibility of an Anderson signing.

The problem with this is that the UFC doesn’t really have any of its own featherweights to call upon instead. Though the promotion is reportedly considering bringing former bantamweight title challenger Cat Zingano up to featherweight to fight Cyborg, this would just be the latest poor decision in the long chain of poor decisions that compose the timeline of this new division. Zingano, after all, is on a two-fight losing streak at a lower weight class. She’s hardly a saleable opponent for the dominant Cyborg at this time – especially if the UFC decides to put a belt on the line.

As all this mismanaging of the division has occurred, Germaine de Randamie has finally elected to break her silence. She did so with a clear message: that she will not fight Cyborg based on Cyborg’s one previous failed drug test, and that she’s willing to vacate the featherweight title and return to bantamweight if she feels pressured to fight the Brazilian.

And so, just months into its existence, the women’s featherweight division is on life support. It’s a few faint heart beats away from its demise. Its a near-carcass that the UFC would rather poke with a stick than resuscitate.

Its champion doesn’t want to fight its number one contender, and wants to leave the division altogether. Its number one contender is widely considered the uncrowned champion, but can’t seem to find an opponent to save her life. The most suitable opponent for that uncrowned champion doesn’t seem to interest the UFC in the slightest. Meanwhile, the UFC is ready to send another beefed-up bantamweight to the gallows and sell this grim spectacle to us as a title fight… And all the while, it should be mentioned, Bellator’s featherweight division is evolving into a healthy and watchable division.