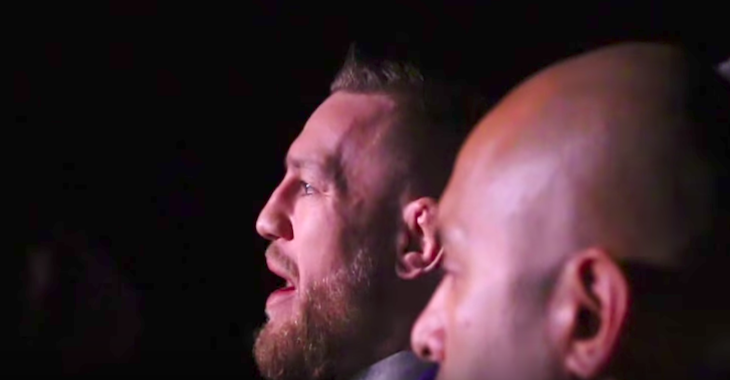 Whether you thought it was exciting, or a little over the top, you can’t deny that Conor McGregor and Floyd Mayweather’s four-city press tour, which stopped in LA, Toronto, Brooklyn and London, was big. The tour drew out upward of 50,000 fans and generated countless headlines.

The tour was also very exclusive. Tickets were expensive, and they weren’t easy to get even if you could afford them. Media credentials were also pretty difficult to acquire. Backstage access, finally, was as locked down as Area 51. The inner workings of these tour stops were only accessible to members of the two fighters’ teams, the promoters, and the crew.

Somehow, however, one fan managed to sneak his way into the London stop of this tour, and not only get close to McGregor, but actually walk out into the arena with him.

This fan, who documented the entire odyssey on his Youtube channel, made his way behind the scenes with a simple bit of photoshop magic, whipping up his own backstage passes and donning some nice clothes so he looked the part. A little bit of careful maneuvering later and he was wandering the guts of the arena, where he twice crossed paths with UFC President Dana White, and ultimately, got quite close to McGregor.

See the video of this whole adventure – which was probably pretty illegal – below.

This is not the first time, of course, that crafty fans have managed to sneak behind the scenes of a massive combat sports event. Back in November of 2016, two Irish fans flew to New York and snuck into the stacked UFC 205, which was headlined by Conor McGregor’s lightweight title fight with Eddie Alvarez.

Conor McGregor and Floyd Mayweather will do battle in Las Vegas on August 26.