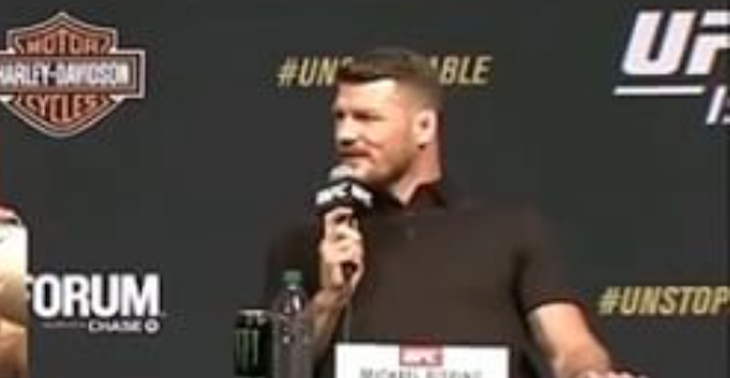 The scrap between Calvillo and Calderwood went the full fifteen minutes and in the end the judges sided with Cynthia who was awarded the unanimous decision victory.

While giving his post-fight analysis of the Calvillo vs. Calderwood matchup, “The Count” couldn’t help but to take a stab at the Team Alpha Male gym and it’s members.

Michael @bisping is the king of #ShotsFired today, this time at Team Alpha Male? #NoChill https://t.co/bTBHAuH7eZ

“Joanne (Calderwood) should probably fight at 125 (pounds).” Bisping stated. “All in all when you watch that back, she (Cynthia) did a fantastic job. Do you know what really impressed me? Because Joanne is so tall, and let’s remember that Cynthia trains with Team Alpha Male, ok. So she is not used to training with people that have a longer reach than her. Because no one at Team Alpha Male has a reach like Joanne Calderwood. Like Joseph Benavidez, Uriah Faber, Chad Mendes, they are like little T-Rex’s. But she did a great job against a taller person.”

Michael Bisping is expected to return to the octagon later this year against current UFC interim middleweight champion Robert Whittaker.