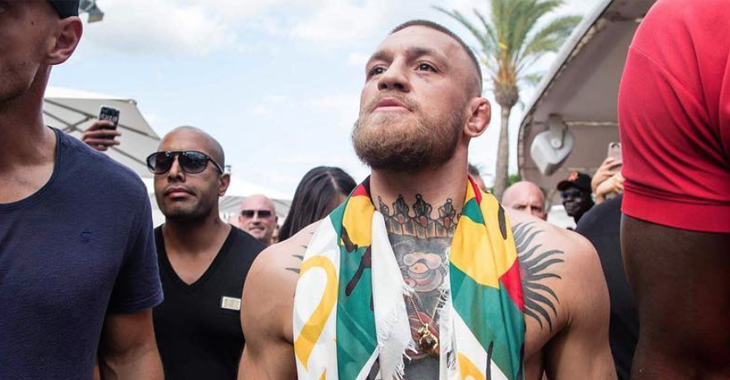 Current UFC lightweight champion Conor McGregor is coming off the biggest payday of his career in the multi-million dollar boxing match with Floyd Mayweather, which is trending to be close to or breaking the Mayweather vs Pacquiao record for the richest fight in history.

Following his 10th round TKO loss to Mayweather, McGregor held his head high in the ring and the two superstars shared a great deal of respect for one another. The two embraced in the ring after the fight was over and had good things to say about each other at the post-fight press conference.

With not much time to rest after the massive fight and afterparty in Las Vegas, “The Notorious” jetted off to Ibiza to attend his childhood friend’s wedding. The UFC champion also attended a pool party with his girlfriend Dee Devlin along with some friends while in Ibiza where the crowd gave them a warm welcome.

A couple swimsuit models at the pool party couldn’t help but to get a pic with the combat sports star who was still sporting a black eye from the fight.

Conor McGregor is expected to head back to competition in the UFC now that his big money fight with Floyd Mayweather is now over. With Tony Ferguson and Kevin Lee fighting for the UFC interim lightweight title at UFC 216 in October, fighting the winner of the interim title fight next would make the most sense. However, Conor McGregor seems to be rewriting the way things are done in the fight game.