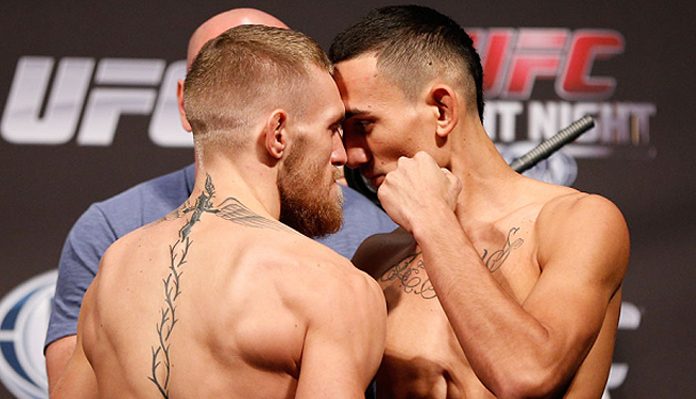 Conor McGregor supposedly was not only going to step in to fight Frankie Edgar at UFC 222, but it was allegedly going to be for a brand new 165-pound title on top of that. The info about the title was leaked out by Edgar’s manager himself, although he disputes that they were ever offered a fight. McGregor teammate Artem Lobov recently confirmed that the fight and belt was a go. In response, Max Holloway let it leak that he too was in talks to fight for a new belt.

“One more update Ariel Helwani. After I was pulled from UFC 222, I offered to amputate my leg and fight for a 115lb belt against Demetrious Johnson. It was very, very close. Plans were in place. But I was told there wasn’t enough time. Stay blessed: The DEFENDING Champ. No need to trademark what he can’t claim.”— Max Holloway via his official Twitter.

Max Holloway and his former opponent Conor McGregor have been going back and forth for awhile. It all started when McGregor shared an eye-spy photo after beating Holloway in 2013. Holloway always has quips at the ready, whether it be for fun or to eventually rematch the Champ Champ™. They’ll never rematch at 145, but maybe 155 or even 165. Why not? Let’s create a 152 weight class and have them fight for a new belt. We just want to see the fight.