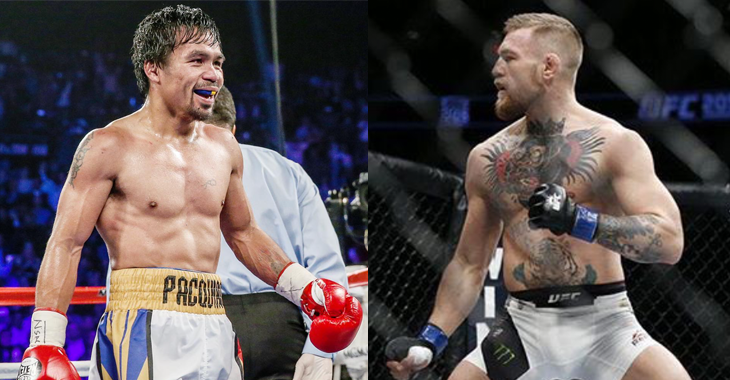 Back in August, UFC lightweight champ Conor McGregor stepped through the ropes of the boxing to battle undefeated legend Floyd Mayweather Jr. While the Irishman must be commended for taking on such a decorated legend in his pro boxing debut, his effort to do so ultimately went the way most expected, as he was stopped by a volley of punches in the 10th round.

With this boxing match soundly in the rear-view, the perception has been that McGregor’s next fight will be in the UFC’s Octagon. In terms of possible opponents, the frontrunner is definitely Tony Ferguson, though Nate Diaz, Tyron Woodley and Georges St-Pierre are also being options.

All that being said, boxing legend Manny Pacquiao recently made a post to Instagram that implied he would be McGregor’s next opponent, and that Irishman would compete in boxing next, not MMA.

It’s possible, of course, that this is merely a bit of wishful thinking on the part of Pacquiao and his team, but it is interesting all the same.

When we last saw Pacquiao in the ring, he lost a controversial decision to Australia’s Jeff Horn. This loss was preceded by wins over Jessie Vargas and Timothy Bradley.

McGregor meanwhile, preceded his loss to Mayweather with a UFC lightweight title winning knockout of Eddie Alvarez. Prior to this title win, he engaged in two legendary battles with Nate Diaz, losing the first and winning the second.

Do you want to see Conor McGregor and Manny Pacquiao box?