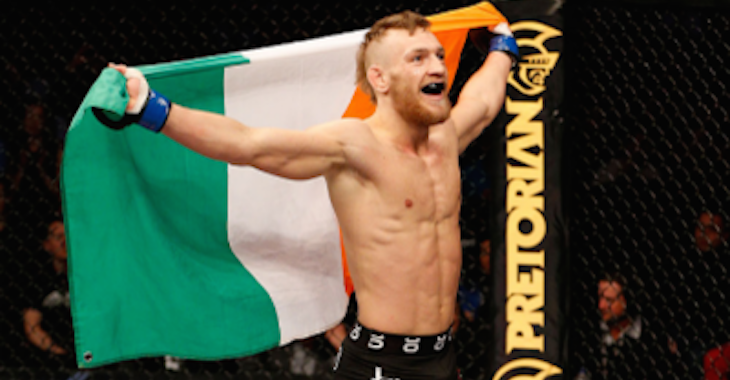 UFC superstar Conor McGregor has taken the MMA world by storm since making his UFC debut in 2013, where he knocked out Marcus Brimage in the very first round with beautiful looping uppercuts.

Fast forward four years and McGregor is undoubtably the biggest name in MMA at the present time. After making history in 2016 by capturing his second straight UFC championship when he knocked out Eddie Alvarez at UFC 205, McGregor announced that he would be taking time away from the sport due to the upcoming birth of his firstborn son. During his layoff, news has continued to surface regarding a potential superfight between McGregor and undefeated boxer Floyd Mayweather.

Have kept these from wrapping @thenotoriousmma hands for his @ufc debut. I'll always remember at the end of the night, after a successful debut and shout out for the bonus we were back in the changing rooms packing up our bags and he spotted these on the ground. They were a few spares left over that are always just left behind by the various teams back stage. "Here coach, pack them up. we can use them in the gym, no point wasting them!". I came home and put them in a drawer and told myself they'd be a constant reminder to me when we struggled to afford fresh wraps for each training session, circumstances have improved since then but the mentality is the same.

Kavanagh of course has served as McGregor’s coach throughout his professional career, and has been credited with creating the masterful gameplan that led to McGregor’s UFC 202 win over Nate Diaz after being submitted in the pair’s first meeting.