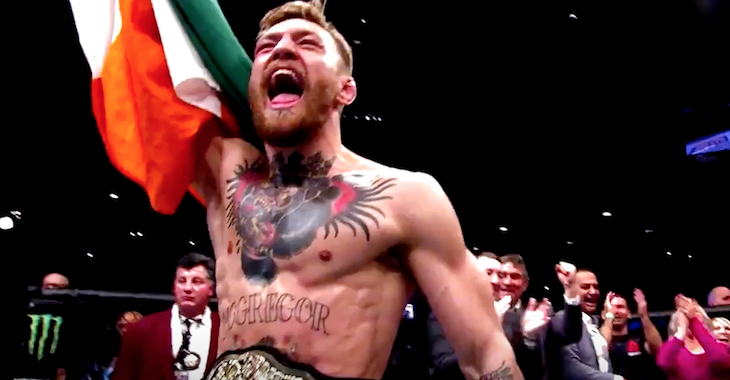 On August 26th, UFC lightweight champion Conor McGregor will step into the ring for a highly anticipated showdown with undefeated boxer Floyd Mayweather at the T-Mobile arena in what could very well go down as the biggest fight of all time.

Ahead of that fight, many fans have questioned when, or if, Conor McGregor will return to the UFC to defend his lightweight title after the fight with Mayweather given that McGregor won the lightweight championship in November of 2016 at UFC 205, when he cemented his place in the UFC history books as the first simultaneous two-division champion.

SBG Ireland head coach John Kavanagh revealed in a written piece for The 42, the tentative plan for McGregor’s UFC return:

“Many of the questions I’ve been receiving over the past week have focused on when Conor will fight in the UFC again. My expectation is that it will happen this year, although it’s always difficult to predict what Conor is going to do next.

“If he goes in there and knocks out Mayweather in the first round, there will probably be talk of rematches and stuff like that. But the tentative plan, as I see it, is certainly for a fight in the UFC in December. But in the meantime we’re completely focused on boxing and Floyd Mayweather.”

“We’re not going over to Las Vegas to make up the numbers on 26 August. When this contest takes place, we’ll be 100% ready — physically and mentally — and nothing other than victory will be acceptable. This follows UFC President Dana White’s prediction for McGregor’s return to the Octagon. Following the announcement of the fight with Mayweather, White revealed on a live Q&A stream that the plan is for McGregor to “turn right around” and defend his UFC championship barring any major injuries sustained in the Floyd Mayweather fight.

When McGregor returns to the UFC to defend his belt, there will be no shortage of contenders waiting for him.