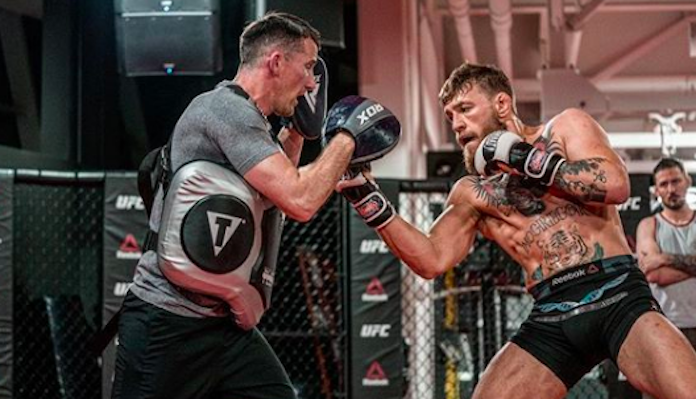 Conor McGregor is not shy on confidence heading into his mammoth title fight with UFC lightweight champion Khabib Nurmagomedov, which goes down in the main event of UFC 229 this Saturday in Las Vegas. In fact, the Irishman expects that his pinpoint striking will be far more than Nurmagomedov can handle.

“I think I’m going to turn [Nurmagomedov] into a bobblehead to be honest,” Conor McGregor told The Mac Life this week (transcript via MMAjunkie). “It’s personal, but it’s the same. It’s always a little personal, but in there, like I say, it’s a blank face and a new body. But I predict – I see his head, I see him turning into a bobblehead when I hit him. I feel his brain is going to rattle when he gets a clatter of me. That’s what I’m keeping in my head.”

Khabib Nurmagomedov, of course, is likely to have other plans. In fact, he’s likely to have a very different plan, as he will almost certainly lean on his tremendous wrestling skill early and often in the fight.

Conor McGregor seems confident that he’s ready for this possibility.

Conor McGregor has not competed since August of 2017, when he came up short in a blockbuster boxing match with undefeated legend Floyd Mayweather Jr.

His most recent MMA contest occurred in November of 2016, when he knocked out Eddie Alvarez to win the UFC lightweight title. Because he was still the UFC featherweight champion at the time, this made him the first fighter in UFC history to hold titles in two weight classes simultaneously. He’s 21-3 overall.

Do you think Conor McGregor can defeat Khabib Nurmagomedov at UFC 229?