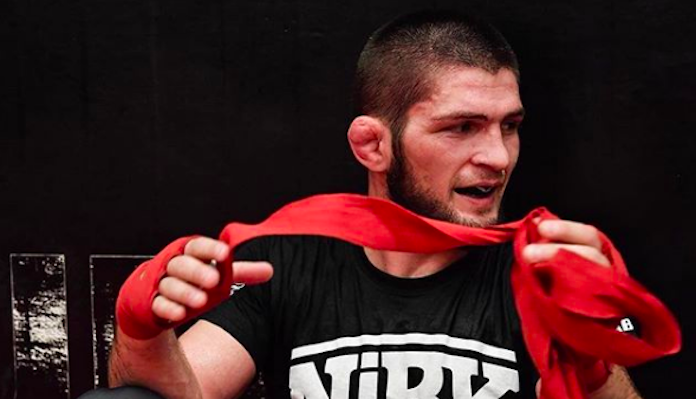 Khabib Nurmagomedov has long been considered one of the best lightweights in the world, but for a time between 2014 and 2016, his standing in the division was seriously hurt by his inability to stay healthy.

During that period, Khabib Nurmagomedov was scheduled for three fights — two with Donald Cerrone, and one with Tony Ferguson. Unfortunately, not one of these bouts came to fruition as the Russian star kept sustaining injuries that rendered him unable to compete.

Khabib Nurmagomedov, who is now the UFC lightweight champion, is currently gearing up for a massive title fight with former lightweight and featherweight champion Conor McGregor. The fight goes down this Saturday night, in the main event of UFC 229 in Las Vegas.

Heading into this massive contest, which is Nurmagomedov’s third fight in the last 12 months, his head coach at American Kickboxing Academy, Javier Mendez, assures these injury troubles are soundly in the rear-view mirror.

“Well, people have made it a big deal, there was always that one little bad stretch for him,” Javier Mendez said of the past injuries of Khabib Nurmagomedov on the latest episode of BJPENN.COM Radio. “But it was all related to bad judgment. He hurt his knee at home, he comes into training camp, still with a hurt knee, thinking he was ready to go, and he wasn’t. That knee related to two pullouts. Then, with what happened to his back, with the Tony fight. So that’s the only thing that’s happened. But ever since then he’s always been healthy. It’s just those unfortunate things that did happen. Just that little hiccup. But they were big hiccups, but it isn’t a continuous thing with him. He’s always been healthy, since [then]. It’s just that little one stretch. For the most part, one year out of the five years he was plagued with injuries, but that was it.”

Interestingly, Javier Mendez feels the once-troubling trend of American Kickboxing Academy fighters being sidelined with injuries has been significantly reduced — by almost 50%.

“This is still a relatively new sport and we’re still learning,” Mendez said on a previous episode of BJPENN.COM Radio. “I was still trying to figure out how do we save us from getting injured all the damn time? Why are we getting injured? It’s nuts. Well little simple things, Jason, from having the guys talk to me when they don’t want to spar. They have issues with their girlfriend or their family, you know, they didn’t get enough sleep, or they have a little injury. I want them to point it out to me. I want them to tell me what’s going on. So this way I’ll say, ‘okay, you’re just boxing today or okay, you’re not sparring today.’ Let me tell you something. Our injury rate has dropped almost over 50 percent.”

Do you think Khabib Nurmagomedov’s injury troubles are truly in the past?