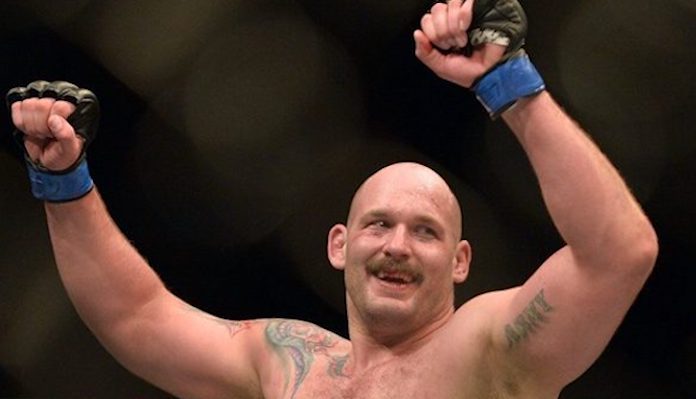 Recently signed heavyweight fighter Tim Johnson plans on opening some eyes at Bellator 208 when he takes on Cheick Kongo in a feature main card bout.

Johnson, 33, signed with the Viacom owned promotion after going a very respectable 4-3 inside the Octagon. He holds notable victories over Shamil Abdurakhimov, Marcin Tybura, and Daniel Omielańczuk while under the UFC’s banner. As impressive as those wins are, Johnson wanted more.

BJPenn.com caught up with Bellator’s big man to talk about his upcoming fight against Kongo, how his requests for big fights fell on deaf ears, and more.

After spending the last four years competing in the premier mixed martial arts promotion on Earth, Johnson now takes his talents to the Scott Coker run promotion. As the big man tells it, the change in scenery has been a welcomed sight, but Johnson is chomping at the bit to get back in the cage.

“The change has been pretty good,” Johnson explains. “Other than I was supposed to make my [Bellator] debut back in July, but I actually had to pull out of the fight due to injury. So its been a little bit of a longer lay off than I wanted it to be.” Johnson continued, “My last fight was in February and its October now, so I’m coming up on not fighting in eight months. I’m looking forward to getting back in there and knocking off the ring rust and getting punched in the face.”

When Johnson does make his Bellator debut in just two short weeks, he will be taking on the 43-year-old Kongo who has had a career rebirth as of late. Kongo finds himself riding a career-best six-fight winning streak; he most recently dispatched of Javy Ayala, thus earning a coveted alternate spot in the heavyweight Grand Prix.

“When the opportunity came to fight Cheick I was blown away,” said Johnson regarding his next opponent. “This is a big-time fight, and I’ve been asking for big-time fights for a long time now. So I’m just excited to get this opportunity.”

Johnson is referring at his repeated attempts to lobby the UFC matchmakers for a big fight. Instead, it seemed, all the UFC was willing to give Johnson was mid-level debut fights.

“After my second or third fight in the UFC, I cracked the top 15. I got as high as 12 and never dropped out of the top 15. After every win, I wanted to fight big name guys but it never amounted to much.” Johnson further explained, “I asked for Stefan Struve, Alexey Oleynik, Derrick Lewis I asked to fight more than once. They would always come back and say, we can’t give you that guy but we got this nice debut for you. So I’m more than happy to fight a big-time name.”

Johnson will get his crack at a big-time name in just two weeks time.

Bellator 208 will be broadcast live on the Paramount Network from Long Island, New York on October 13. Here is a look at the main card.

Do you think Tim Johnson can take out Cheick Kongo in his anticipated Bellator debut?