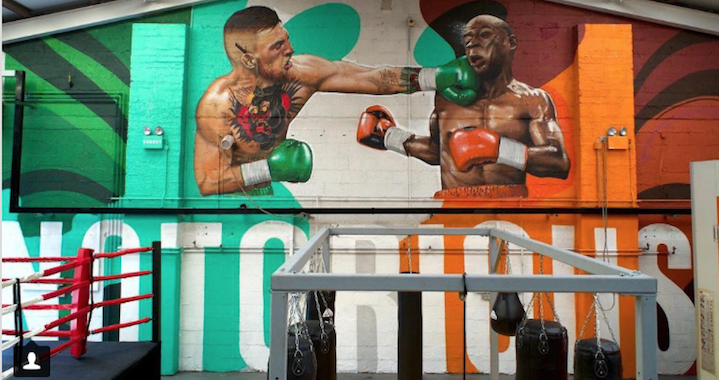 Ahead of Conor McGregor‘s highly anticipated August 26th showdown with Floyd Mayweather, the champ showed off a massive mural on the wall of his gym which depicts him knocking out Mayweather.

The mural instantly drew attention from fight fans due to the level of boldness displayed. However, as it turns out, it wasn’t McGregor who commissioned an artist to create the mural, it was SBG Ireland head coach John Kavanagh, who informed the artists that they needed to complete the mural in a very short amount of time. They released a statement on who they are, and the project, to Yahoo saying:

“We, SUBSET, are a Multidisciplinary Artist Collective with interests ranging from Art, Marketing​,​ Music and Film to ​Finance, Hospitality and Clothing. We have a great relationship with John Kavanagh and he graciously provided us with the opportunity of producing the artwork which is now the backdrop for Conor’s preparations.

The artwork is a gift for John which will aid Conor with the visualization of his success. As it was a surprise we were required to produce it once he finished a training session on Sunday evening and before he began another training session on Monday night. We filmed his arrival and reaction to the artwork and we are currently in the process of making a short video using the footage. This will be posted online in the coming days – https://www.instagram.com/subsetdublin/.”

You can see photos of the mural below for reference!

I am a filthy Irish animal.

On August 26th, fight fans will see if the visualization of the KO will pay off.