To close out 2016, undefeated bantamweight Cody Garbrandt stepped into the Octagon with UFC bantamweight kingpin Dominick Cruz for a highly anticipated grudge match in the co-main event of UFC 207. Garbrandt of course entered the Octagon and put on a phenomenal display as he bloodied and battered the champ over the course of 5 rounds, utilizing his phenomenal head movement and power to remain one step ahead of Cruz en route to capturing the bantamweight title. 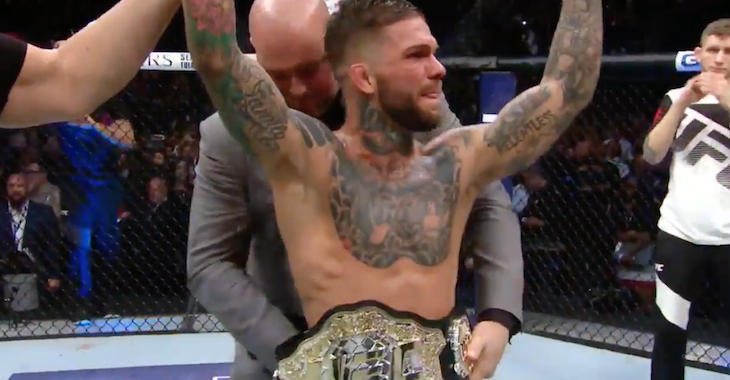 Following the fight, there was much talk of who Garbrandt would defend his title against first. While Garbrandt promised Cruz and immediate rematch before the fight, an impressive performance by former champion TJ Dillashaw on the same card left fight fans calling for a grudge match between former teammates Garbrandt and Dillashaw. While the UFC has since announced that Garbrandt and Dillashaw will be coaching opposite one another on The Ultimate Fighter before then stepping into the Octagon to fight for Garbrandt’s belt at the end of the season, the champ is still eyeing a superfight with UFC lightweight champion Conor McGregor.

He spoke to TMZ to discuss his next move, and a potential Conor McGregor superfight:

“He [Dillashaw] was never the champion. He held a fake title, I went in there and dethroned Dominick Cruz, I’m the bantamweight champion of the world. He’s walking around as a fake champion [while] Cruz was hurt. So that’s one I’d like to get back for everyone on the team as well, there’s a story for that. Jose Aldo, I’d like to fight him, he’s another legend in the sport. It’s a great matchup stylistically. And you know there’s Conor, Conor’s still out there whenever he’s wanting to come back. There’s a lot of fights for me, but I want to defend my title, staple my dominance in my division, and see what’s on the horizon whether it’s Jose Aldo, Conor McGregor, or whoever.” 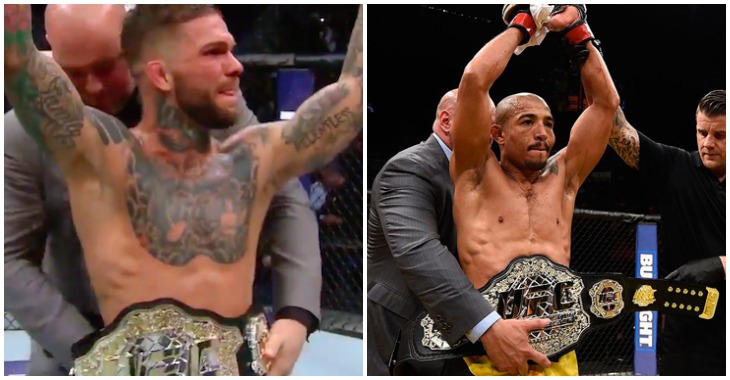